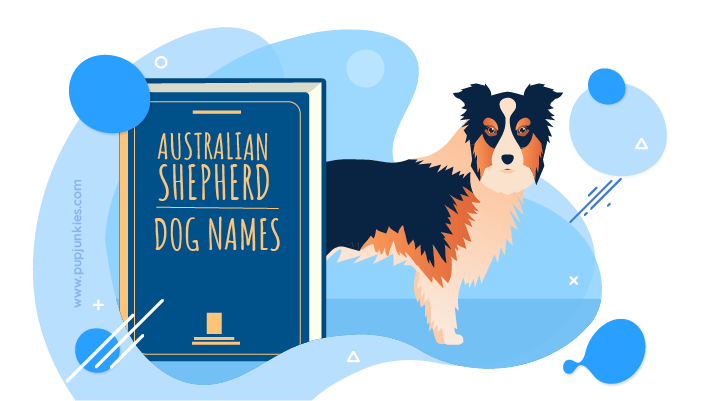 If you ever longed to feel like you were sitting in the mountains, enjoying the brisk breeze, soaking in the sweet aroma of the flowers and staring off into the distance as you a beautiful breed ran about herding your livestock, the Australian Shepherd is just for you.

Some of the names below are part of a list of popular dog names, but also recommended monikers that fit the overall look or feel of the Australian Shepherd.

For any dog that loves to jump and remain active, a great name for Australian Shepherds.

For a dog that loves to be in charge, something that is befitting for a dog like the Australian Shepherd that tends to put itself as a leader.

Short for avocado, this is one great name that many owners choose. Its simple and easy to remember.

For any dogs that love to play in water.

A great name for hard working dogs, a name befitting a working dog like the Australian Shepherd.

A perfect for that special dog that loves being with their family.

This is a name befitting a disciplined dog.

A name for any terrific, amazing dog.

This is a name for an Australian sheepdog, meaning it refers to itself in some way.

Much like kerosene, this is for any dog that is as explosive as the Australian Shepherd.

The list below tries to provide the best list of names that are befitting your Australian Shepherd’s appearance or personality, but are specifically great for females.

Straightforward, this name is for any beautiful dog out there.

A beautiful name for a female dog with as much sass and personality as an Australian Shepherd.

For those genuine, true-to-heart pups.

A name perfect for that playful dog.

A variation from lipstick, this is for a sassy dog like the Australian Shepherd.

Derived from lollipop, an owner gives this to any dog with a sweetheart.

A feeling that evokes familiarity.

A name for a responsible dog.

A well trained dog that is top-notch quality (hence the term ‘ace’) .

Naming your Australian Shepherd after a character in a movie or a dog from a famous film is the best way to give a name that is fashionable, unique, and possibly recognizable by many.

A name of a dog from the film Annie.

This is the name of the dog from There’s Something About Mary.

One of the dog’s name from The 101 Dalmatians.

A great name from The Truth About Cats and Dogs.

The awesome ghost dog from The Nightmare Before Christmas.

A dog name from the movie Terminator.

The dog’s name from the film Lethal Weapon.

Another name from the film Snatch.

The name of the dog from the film Back to the Future.

Meaning brave in Zulu, this is quite the unique name.

This means divine in Greek.

Meaning possessed of youth in Hindu, it might be a bit harder to pronounce.

Meaning shining one in Pali, this is definitely not a name most Australian Shepherd’s will have.

This means ‘I hear the sun rising,’ in the Sioux language.

A name that means ‘from the heart’ in Sioux.

A beautiful name meaning song of the Lord in Hebrew.

Another name that means rightly guided in Arabic.

A name that means night song in Sioux.

A short simple name that means precious in Indonesian.

A slang term for Australian.

An Australian term for a woman.

A simple name for a mate like your Australian Shepherd.

An Australian word for the boomerang, it is great for a dog that is active like the Australian Shepherd.

An Australian word for the boomerang, it is great for a dog that is active like the Australian Shepherd.

A slang term for excellent and something that well defines the appearance and personality of a dog like the Australian Shepherd.

An expression in Australia for surprise. It is perfect for a dog that is so colorful and wonderful.

This is an ideal name for a dog that looks like it loves to run around.

It has a similar appearance to the famous golden retriever.

A name meant to describe the fun blend of colors.

An Australian avocado, this is a funny name to give a dog.

Coming from a term meant to describe cold beer, it is for that dog you love spending time with.

This is just another variation of the word dog, but with a funny ring to it.

An environmentally conscious name for a dog that loves to play in the wild.

A funny twist to describe an ever-ready dog (like journalists).

A sausage, this name can be used for food-focused dogs.

Coming from the word enraptured, this is a light, fun way to describe a dog that enraptured you

The dog from the advertisement for Bush’s Baked Beans.

A name of a dog from the animated film Wallace and Gromit.

A Brussels Griffon dog from the film As Good As It Gets.

A pet in the novel Oliver Twist.

The name of the Meriwether Lewis’ dog who accompanied him in their famous journey.

The large dog featured in the Pixar movie Up.

The name of the best cow dog in the West

From the novel, Beautiful Joe: The True Story of a Brave Dog.

The famous dog name from the 1955 Disney film The Lady and the Tramp.

A dog name found in the novel The Silmarillion written by J. R. R. Tolkien.

You can count on hours of fun and active amusement with the Australian Shepherd, yet if you can’t provide them with enough activities to keep them occupied,  they will turn into unexpected destructive, barking, annoying dogs. If you want to be surprised by the performance of your four-legged friend, train him and see what great potential they hold.