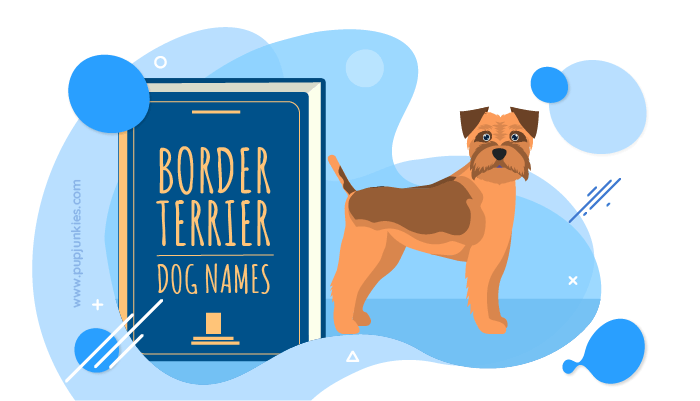 Border Terriers were first bred near the border of England and Scotland, and were used in farming terrains to keep away foxes and other similar predators, hence the name ‘Border’ Terrier.

Border Terriers are quite intelligent, friendly around children and socialize quite well with humans. Since they have hunting genes, they are quite easy to teach and due to their wits, learn what they are taught rather quickly.

When owning a new dog, one of the first things any dog owner should do is name their beloved pup. Appearance and personality are things to consider when naming their hound.

Thus, with the right amount of research and effort, the right name can be found. To help with this process, we have provided a list of names for your Border Terrier dog breed.

Some of the names below are part of a list of popular male dog names, but also recommended monikers that fit the overall look or feel of the Border Terrier.

Short for Edward, this is a common English name.

This is the first name of the most famous Narcotic criminal in history, Pablo Escobar.

Mike is quite a common name and is a regular standard for male dog names.

Since Border Terriers are natural hunters, this name would be ideal for defining what it is.

There is no one that does not recognize the name of the famous rock star, Elvis Presley, which is what makes this name a classic.

Border Terriers are known for their agility and speed so it is worth considering giving this Roman god name to such a dog.

This is quite the fitting name for something that lights up your mind.

If your Border Terrier has a brownish coat, this name would be perfect for it.

A generic, yet classic name that can refer to the loyal traits a dog like the Border Terrier possesses.

Slang for bro, this is a suitable name for a companion dog.

A name that refers to the famous singers KC and Jojo. A dog that looks and seems as cool as the Border Terrier deserves such a name.

The list below tries to provide the best list of names that are befitting your Border Terrier’s appearance or personality, but are specifically great for females.

A spicy name for a small dog like the Border Terrier.

A simple yet sweet name for a small sized dog.

This is rather straightforward, but many female dog owners have been adopting this name.

A cool name for any dog of any sex.

This is a warm name that incites the image of spring, and is good for a dog with the brown coat of a Border Terrier.

A name that makes dog owners smile everytime they say it.

This is a unisex name that became quite popular amongst dog owners over recent years.

Short of Olivia, it is great for any female dog owners.

This name is not that common but that is what makes it a good choice for female dog owners.

Meaning she in French, something about this name is quite beautiful and delicate for the Border Terrier.

Naming your Border Terrier after a character in a movie or a dog from a famous film is the best way to give a name that is fashionable, unique, and possibly recognizable by many.

The name of the dog from Up (not Doug).

One of the many dogs from 101 Dalmatians.

This is the name of one of the character from the Pixar movie Coco.

A main character that represents strength from Brave.

A name of one of the triplet boys from Brave.

Another name of one of the main characters from The Little Mermaid.

A character from the Pixar animated film Toy Story.

This is the little boy from Beauty and the Beast.

One of the dogs from 101 Dalmatians.

A dog of the main character Fry that waited for him till the end from the TV show Futurama.

For a dog that has its roots around Scotland borders, this Scottish word for traveler is perfect.

Meaning pleasant in Scottish, it is what the Border Terrier does for any owner.

Meaning pure, this is a long but majestic name to give to any dog, let alone a Border Terrier.

Meaning victorious, it serves as a strong female dog name.

A Scottish word for counselor, this is quite powerful.

The Scottish name for festive.

A rather long word meaning illustrious lady, ideal for any female Border Terrier.

A unique name to give any dog, but it means gentle.

A Scottish word for cheerful.

A beautiful word for oak tree, it can refer to the scruffy nature of the Terrier’s appearance.

This word means foreign, and in a way, can describe the identity of a Border Terrier.

Meaning dove in Scottish, it can refer to the agile movements of this breed.

A classic name for a female dog that has the scruffy appearance of a Border Terrier.

A nice name for a dog that is quick on its feet since the name means swift.

Derived from the name Griselda which means gray battle, it can refer to the Border Terrier’s grey coat.

Meaning big gap, this can refer to the fact that the Border Terrier served as dog along the borders.

There are spots here and there across the Border Terrier, making this name that means speckled one quite befitting.

A Scottish word for great, which can describe the dog’s personality and appearance.

A name that obviously refers to the messy unkempt look of a Border Terrier.

This is another name that refers to the scruffy look of the Border Terrier, since it appears its hair will all be tangled up.

A reference to the actress and comedienne Tina Fey.

This is a silly name to give any dog that is strong and brave like the Border Terrier.

An obvious combination of the word bark and the actor Mark Wahlberg’s name.

A funny name that is referring to the comedienne Whoopi Goldberg’s name.

This name is not that funny, but the concept behind it is hilarious, since it is usually associated with Felix the Cat.

A dog that may refer to the speedy quality of an agile dog, but is quite silly to use as a name.

It has a rather tough vibe to the sound, which is why it makes it funny because the Border Terrier is far from looking tough.

This is a funny name for any adventure seeking dog.

A beautiful name of a Chihuahua that was known for its role in Beverly Hills Chihuahua.

The name of the dog who served as journalist John Grogan’s center of attention and served as the inspiration for the titular character in the film Marley and Me.

This is the star of the British animated TV series Tractor Tom.

This is a water dog that was part of the President Barack Obama’s family.

This is the name of the title character from the movie of the same name..

The name of the St. Bernard from the comic strip Mark Trail.

The famous Chihuahua character in the animated TV series The Ren and Stimpy Show.

A name of the dog from the film My Dog Skip.

The title character from the book Jock of the Bushveld.

The name of the dog from the Bush’s Baked Beans advertisements.