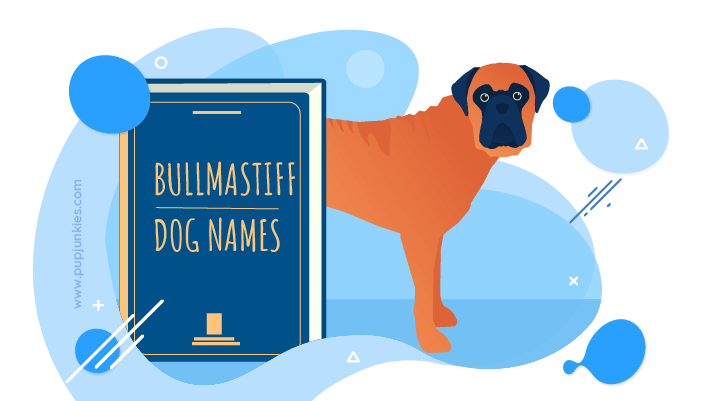 Originating from the United Kingdom, the Bullmastiff is a large-sized breed (although it may not look like it in photos), and is part of what is called the Molosser dog type. Their roots go as far back as the 19th century, where they were employed as the gamekeepers to guard and protect their owners’ estates. This was particularly effective since these dogs have a solid build, short muzzles, and all around look rather intimidating.

Some of the names below are part of a list of popular male dog names, but also recommended monikers that fit the overall look or feel of the Bullmastiff.

A male dog name that goes well with a tough dog like the Bullmastiff.

This is a name that fits more wiser looking dogs, but who says the Bullmastiff doesn’t look intelligent?

A cool name that has risen in popularity ever since the emergence of the new Star Wars film.

Although this dog breed does not look like a lion, this is a popular name to give to dogs that have a strong image.

A popular name to give to a dog that looks similar to the Bullmastiff.

A cute name to give to a male Bullmastiff pup.

A funny yet befitting name to give to this dog breed. For some reason, its face and short hair fits.

A befitting name to give a dog with a loyal attitude.

The list below tries to provide the best list of names that are befitting your Bullmastiff’s appearance or personality, but are specifically great for females.

This might be in reference to its light colored coat, this is a good name for an affectionate lovable dog.

A name that has resonated with many dog names.

A Russian name that fits very well with a tough dog like the female Bullmastiff.

This is a name that continues to pop up in many top tens of female dog names, regardless of gender.

A name that can be used to give to a male dog as well, but it is definitely a sweet name to give to your female dog.

This name goes well with the look of a female Bullmastiff.

A name that isn’t the top choices, but for many Bullmastiff owners, it has been a go-to name.

Named after the Australian city, this is a name that definitely works well with a light coated Bullmastiff.

Naming your Bullmastiff after a character in a movie or a dog from a famous film is the best way to give a name that is fashionable, unique, and possibly recognizable by many.

Named after the famous actor Jack Nicholson, this is a name that fits a simple dog like the Bullmastiff.

This name is a tribute to the famous actor that played the Joker, Heath Ledger.

There is no greater beauty than that of Grace Kelly, a timeless classic.

The name of the main character from the film Back to the Future.

A name of the main protagonist in the Wizard of Oz and a great name to give to your female Bullmastiff.

Refers to the actress Sandra Bullock, the last name is a seemingly great fit for a dog like the Bullmastiff.

This refers to the character bodyguard in the movie Leon. This fits since the Bullmastiff is a guardian dog.

The name of the ‘white knight’ in the movie The Dark Knight, this is befitting a dog that acts as a guardian dog.

The famous dog from the claymation film Wallace and Gromit.

From the film Star Wars, this name fits this dog’s appearance,

Another way of saying the name Sophia, which means wise.

A name that refers to violet in color.

In Arabic, this means greatness.

In Sanskrit, this name means excellence.

In Sanskrit, this means sprout; blossom.

A Dutch word for enduring one, quite befitting for a Bullmastiff.

In Quechua, this means the courageous one.

This goes well with their guard dog roots, and tough appearance.

These dogs are definitely known for their brawn and look tough as hell.

Titan was an ancient Greek deity and a person of enormous size, strength and influence, hence the perfect fit for your Bullmastiff.

Short for ammunition, Ammo is a strong, tough dog name.

This is a name that is befitting a dog that is quick, and even though the Bullmastiff might be a strong build, it is definitely quick on its feet as well.

A dog that is as tough-looking as the Bullmastiff definitely deserves the name of Major.

A popular name for any dog that holds a tough exterior.

Defined as a person who resists authority, Rebel is a badass dog name.

This is used to describe the overall burly appearance of the Bullmastiff.

This name is perfect for any strong, thick-build dog like the Bullmastiff.

A name like this is hard to imagine as being light or weak.

A strong and sporty name.

For some strange reason, many have named their Bullmastiff this. It does sort of fit the appearance of a Bullmastiff, even though we cannot pinpoint the exact reason why.

A hilarious name to give a tough looking dog like the Bullmastiff since the character from the Big Bang Theory the name is based on is far from tough.

The character from Toy Story, this name is hilarious just out of the fact that it the Bullmastiff is far from being as skinny as this doll.

A hilarious name that does not really fit the image of the Bullmastiff.

Do you see a pattern? This name is also quite funny for a Bullmastiff since it is far from the appearance of the dog.

A name that is far from the size of the Bullmastiff. The only thing that is somewhat similar is the color.

These dogs are known for their strong jaws,

A funny name to give this dog since it has a geeky tone to it and the Bullmastiff is nothing but a tough looking dog.

A funny name to give a dog, but this one is somewhat befitting.

A silly name to give such a tough, big dog like the Bullmastiff.

This is a funny name to give to your pet, especially because it isn’t fat, but may appear big and bulky due to its strong build.

The name of the dog star in the Underdog movie.

The name of the dog in the 1950 animated Cinderella movie.

The name of the dog in the animated series Corneil and Bernie.

This is an interesting name of the dog from the animated TV series Roobarb.

A name of the dog from the comic strip Little Dog Lost.

This is the name of the first Yorkshire Terrier, born in 1865.

The name of the dog in the movie Bracelet of Bordeaux movie star.

The star of the British animated TV series Tractor Tom.

The name of the first family dog of comic strip Family Circus.