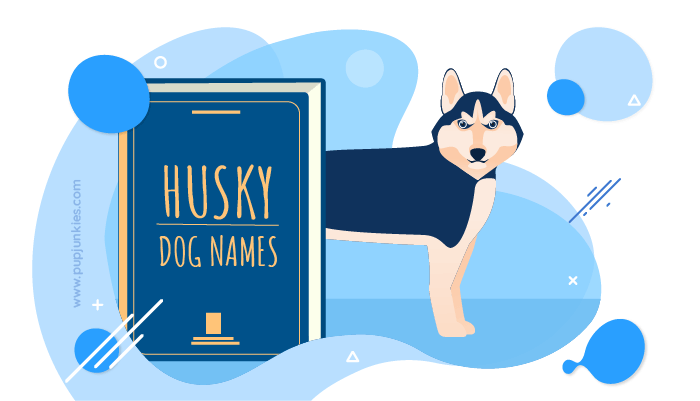 The beloved Husky is a dog breed most people associate with winter. Its blue eyes and black/white fur is makes it distinctively unique in appearance than any other dog. Known as a sled-dog, these pups are considered one of the fastest hounds out there. Strong, sturdy and quick, this is one of the main reasons why many use Huskies as sled-pulling pets.

As expected from this breed, Huskies are generally athletic and full of energy (they would have to be to have the ability to pull sleds for long periods of time). Due to the fact that they were developed in the Arctic, they have a thick coat that ranges in colors from black, grey, white, and sometimes red.

Naming a Husky is a fun task, and is a bit easier than most other breeds since they have such a distinctive appearance (blue eyes, thick coat meant for the winters, etc.). However, we have provided a list of names below to give you a better idea on what to name your Husky dog breed.

Some of the names below are part of a list of popular male dog names, but also recommended monikers that fit the overall look or feel of the Husky.

A perfect name for a winter dog like the Husky.

An interesting male name to give a dog, especially those with keen hearing abilities.

A unique name to give to your male pup/

This name is very common amongst big dogs for some reason.

This name is rather unique to give to a dog, but is befitting a mystical-looking pup like the Husky.

This comes from a Japanese name, and is quite simple but rolls of the tongue easily.

This name is great for a Husky, since it describes the blue hue of its eyes.

Another name that is befitting a winter dog like the Husky.

A simple name that is easy to pronounce and say.

The list below tries to provide the best list of names that are befitting your Husky’s appearance or personality, but are specifically great for females.

This name is a beautiful name to give to a well kempt dog.

A rather exotic sounding name for a dog that looks as cold and beautiful as the Husky.

Another mesmerizing name for a female dog like the Husky.

This name is highly popular choice for Huskies.

A unique name that has a nice fiery feel to it.

This name is based after the dog from the film of the same name.

A simple name that is given to any dog that shines as bright as a star.

A very Russian name, but somewhat befitting a Husky.

A strong female name that fits the look of a Husky.

Another name similar to Kyra, but spelt differently.

Naming your Husky after a character in a movie or a dog from a famous film is the best way to give a name that is fashionable, unique, and possibly recognizable by many.

The main protagonist in the Star Wars films, it is somewhat befitting since this character had blue eyes as well.

Another Star Wars character, this could refer to the Huskies thick coat of hair.

The name of a Siberian Husky from the movie Eight Below.

A name of a dog from the movie Eight Below.

Another dog name from the movie Eight Below.

The name of a Siberian Husky from the movie Eight Below.

The name of the protagonist from Iron Man.

This is a name of a Siberian Husky in the film Snow Dogs.

Another name of a Siberian Husky from the film Snow Dogs.

The name of a Siberian Husky in the movie Iron Will. The movie was based on Albert Campbell’s exploitations in 1914.

In Serbian, this word means devoted.

A Russian word for beautiful red glow in the sky.

In Mandarin, this word means to ‘continue the mission.’

In Sanskrit, this means strong hero.

In Shona, this means ‘God please listen to our cry.’

Tibetan for the world.

A hardworking man in Mandarin.

This one is obvious. It is because the Husky looks like a wolf.

This is a name that refers to the quick speed of the Husky.

This is one dog that has the closest resemble to a wolf, hence the name.

Another reference to the wintry appearance of the Husky.

The Husky is a dog that looks like it would lead a pack without hesitation.

It is natural that Huskies look like natural hunters.

This is a name that is obvious, since as a winter dog it fits with the association of snow.

A dog that looks like it would be employed as a ranger.

A name that refers to the blue eyes most Huskies have.

This name is another one that refers to the winter qualities of a Husky.

A word that refers to beer, but hold a wintry feel to it.

A reference to the famous playwright WIlliam Shakespeare.

Just a silly name to give to a dog.

Meaning ‘you only live once,’ this name sounds funny to give to a dog.

What better way to bring a smile to people’s face than to name a dog after a delicious piece of food.

A common name that pops up when searching for a funny name.

Another hilarious name to give to a dog.

This is actually a cool name to give to a dog, but is simply funny because it reminds people of the character from the books Where’s Waldo.

This might be in reference to the Husky’s thick coat, since the Italian model Fabio has a long lock of hair.

One of the Siberian Huskies in the 2002 film Snow Dogs.

The main leading dog found in the animated movie Balto, based on a true story.

A name of a Siberian Husky in the movie Iron Will.

One of the crew dogs in the movie Eight Below.

A real life character and another Siberian Husky from the animated film Balto.

One of the dogs in Eight Below.

Another Siberian Husky found in the film Snow Dogs.

Yet another Siberian Husky name for one of the dogs in Eight Below.

The lead sled dog famous for the 1925 Serum Run to Nome (Alaska).

Another name of the many Siberian Husky snow dogs in the movie Eight Below.