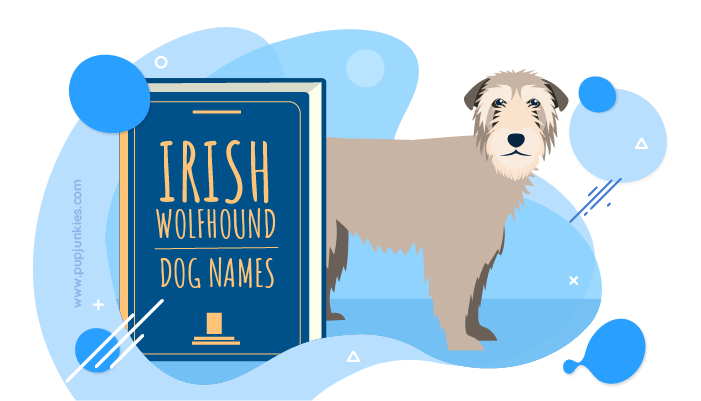 The Irish Wolfhound is another breed of domestic dog. The name originates from its purpose – wolf hunting with dogs – rather than from its appearance. This breed is known as a sighthound which means they primarily hunt by sight and speed. This ability eventually makes them a good hunting dog.

This massively sized dog looks aggressive in nature but they can be your family’s best companion. They get along with children and also strangers if they are well socialized and trained at an early age. Even though hunting is in their bloodline, they never seem to display that trait especially at home.

For such a wonderful breed with a sweet personality, it deserves a suitable and colorful name. Yet, naming any dog can be a difficult task which is why we have brought you a list a names to get inspiration from down below. By referring to these names, we hope you can find a name suitable for your Irish Wolfhound dog breed.

Some of the names below are part of a list of popular male dog names, but also recommended monikers that fit the overall look or feel of the Irish Wolfhound.

This name is a humble name for your strong and brawny Irish Wolfhound.

This common name in Ireland means ‘free man,’ which is befitting for a dog that loves to run about.

This name’s origin is from Scotland and it means ‘gift from god’.

Meaning ‘chief,’ this is a perfect name for a dog that loves to be at the forefront of everything including your attention.

A name of an Irish town and one that could serve as a unique male dog name.

A name meaning brave, this is definitely good name for this breed.

Meaning love in Italian, this is a name that can be used both for male and female.

This is an ideal name for your high drive Irish wolfhound.

This is an Irish name meaning clever and is best suited for an intelligent dog like the Irish Wolfhound.

Meaning free in Irish, this name would be a good name for such a independent and free-spirited dog.

A name that means strong willed.

The list below tries to provide the best list of names that are befitting your Irish Wolfhound’s appearance or personality, but are specifically great for females.

This name which means ‘white’ would not be suitable name except for your Irish wolfhound coated with that color.

A name of Irish roots that means champion. For a dog that is known for its physical and mental health, what better female dog name is there than this?

Meaning dark princess, this may seem a bit dark but it is good for a dog like the Irish Wolfhound.

Meaning wise, this name is well suited for an Irish Wolfhound dog.

Originated from England, this is a beautiful female dog name.

Meaning beautiful in irish, this name sounds wonderful for a dog that always grabs the attention of others.

This is an Irish name meaning ‘pure.’

This name means ‘woman of the people.’ What a great name to give to a dog that stands tall.

This name is a great choice and means great and unbeatable fighter.

Naming your Irish Wolfhound after a character in a movie or a dog from a famous film is the best way to give a name that is fashionable, unique, and possibly recognizable by many.

The name of the German Shepherd that acted in several movies from 1938 to 1946.

This was the name of the dog from the movie called Hocus Pocus in 1993.

The name of the dog from the film Snow Dogs.

The Bullmastiff’s name from the movie called See Spot Run.

A name of the lovable character from The Beverly Hillbillies.

Everyone’s memorable claymation dog from the movie Wallace and Gromit.

This sweet name had by a Irish Wolfhound which was the star in the film Santa Buddies.

A dog that featured in the animated series Sport Billy.

The moniker of the dog that played in the hit TV series Lost.

This unique name belonged to a dog in the animated TV show, Futurama.

A name that means treasure keeper. This is an ideal name for your dog that watches over you.

This name is a Latin origin which means ‘great’.

A soft or gentle breeze and an ideal name for the swift agile dog.

A female name that means “courteous child” in Japanese.

This is a Greek name for “unconquered”

In Lithuanian, this means river.

In Greek, it means bringer of victory.

This is a name that describes its quick agile characteristic.

A name that is quite obviously referring to its fur.

Another name that refers to the speed of its running capability.

This dog is fast. There is no use avoiding names that describe how fast it truly is.

When it is plopped down sitting, many have described its appearance to look like a mop.

Of course this is obvious because this is a place in Ireland, and as an Irish Wolfhound, it is befitting.

In Irish, this means fair, which refers to this dog’s fair skin.

An Irish and Scottish female given name meaning “freedom”, which describes the dog’s free spirit.

Instead of Markus, it is been changed to this, which makes this name a bit silly.

This dog is not small, which makes this name a silly name.

A name that isn’t particularly applicable to this dog, but it might describe all the saliva that falls out from its mouth when its running around.

To be honest, this is a silly name to give to any dog, especially if it isn’t that huge.

This is definitely a name that is quite silly to give a dog like the Irish Wolfhound that isn’t small.

A ridiculous and cute name to give any dog with a tail that is always wagging.

A funny name to give to a dog that is beautiful, yet so energetic.

The Irish Wolfhound loves to run around back and forth, hence why this name is funny yet worth giving.

This name is funny because the dog runs around so much as if its bottom is on fire.

A funny name to give to a dog that is rather fluffy.

The name of the dog that held a title of the oldest dog in the Guinness Book of World Records.

The name of the dog from the book My Dog Tulip by J.R. Ackerley.

One of the favorite pets of Herbert Hoover, the 31st U.S. President.

The name of the Labrador Retriever that became famous for birthing 18 puppies in her first litter.

This was the name of a Border Collie which was the star of the British children show called Blue Peter.

A dog from the TV show Futurama on the Fox Network.

A name of the dog from the Rugrats TV series from 1990s on Nickleodeon Network.

This name is from the dog that was seen in Buster Brown Shoe Company ads since 1904.

This dog is in Pogo, a daily comic strip by Walt Kelly.