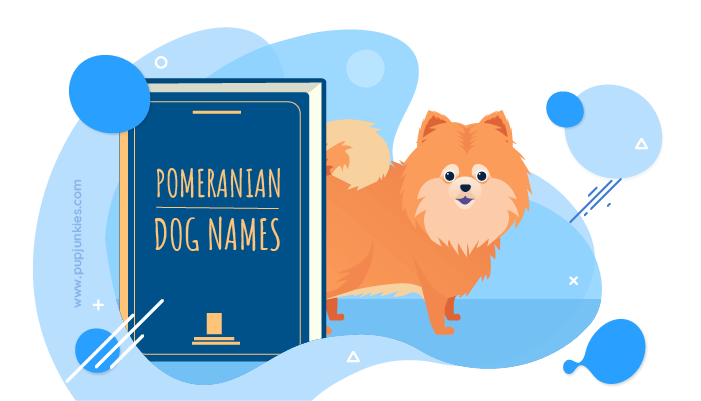 Often called the Pom, the Pomeranian is a toy dog breed of the Spitz type and were originally bred in Europe, of the Pomerania region, hence its name. Having been owned by many rich figures and royal people, such as the Queen Victoria, these dogs have almost become synonymous with wealthy women. This may be due to the fact that they are easy to carry around and are extremely furry, fluffy, making them absolutely adorable.

There are so many things to name your dog, especially something as cute and pint sized as the Pom. For that reason, we have provided a list below of 70 names, each within its own category. To give further inspiration to dog owners, it is important to check out the names that may fit your little Pomeranian dog breed.

Some of the names below are part of a list of popular male dog names, but also recommended monikers that fit the overall look or feel of the Pomeranian.

A classic name for a male dog.

This is a popular choice for any dog owners.

There is nothing sweeter than this name to give a small dog breed that is active.

This may not be the most suitable name for a Pom, but is a popular choice for male dog names.

Meaning young in Spanish, this dog is definitely one that looks rather young.

As we’ve mentioned above, many Poms are well behaved but can be rather yappy.

As many Poms are adored by their wealthy female owners, this dog might be just the right one.

Meaning peace in Hebrew, the sound of this name fits your Pom’s personality.

For the theatrical dog that is willing to wait for you seemingly forever, this dog is perfect but it is a bit funny to give to your male Pom.

The list below tries to provide the best list of names that are befitting your Pomeranian’s appearance or personality, but are specifically great for females.

A unique name that has never been heard of, hence its consideration.

This name can describe the dog’s small olive-like size.

Paris Hilton was famously known for carrying around her Pom everywhere, which is why it might be worth naming your own Pom after her.

A name of a character from a famous video game, it may reflect the beauty of the Pom.

While the Pomeranian is not as white as snow, it definitely looks as fluffy.

This can describe the Pomeranian’s overall peachy demeanor.

A unique exotic name that makes your Pom stand out.

A somewhat Russian-esque feel that sort of fits a dog that loves to be spoiled.

This is another unique name to give to your Pom.

A name that rather popular amongst female dog owners.

Naming your Pomeranian after a character in a movie or a dog from a famous film is the best way to give a name that is fashionable, unique, and possibly recognizable by many.

The name of a dog from the film Back to the Future.

This was the name of the dog from Cinderella.

The quirky and funny dog of Jim Carrey’s character from The Mask.

A name of the dog from the Top Dog.

This is one of the main characters name from the animated film Lady and the Tramp.

A name of one of the dogs from Homeward Bound.

The name of the title role in the film Air Bud.

A name of a dog from the film Anchorman.

This name comes from the film The Magic Roundabout.

Yet another name of a dog from the film Lady and the Tramp.

Meaning defender of mankind in Scottish.

In Yoruba it means King.

In Sanskrit, this means acquiring strength.

In Turkish, this word means fresh or new.

In Lithuanian, this word means summer.

In Shona culture this means be strong.

In Hindu, this means  outshines in battle.

In reference to solace, or sunshine.

A name that is in reference to its toy breed size.

This name is perfect to describe the small size of its body.

Another name that pokes fun at its size.

Since this dog is a toy breed, when it moves around it truly deserves the name of squirt.

With its light brown color and small size, it truly does remind people of a peanut.

This dog is always carried around like a baby.

This is another name that refers to its small size.

When it comes to appearance, it is impossible not to comment on its tiny size.

This is a funny name that can be used for any small dog breed.

A name that is befitting its miniature size.

No real meaning, but just a cute and funny name.

A name that doesn’t fit the small size of a Pom, which is why it is funny because it is contrasting.

Yappy and a bit aggressive, this name is not referring to its size but its ferociousness

This name is hilarious because of how far off it is from the actual size of a Pom.

A cute name for a small adorable dog.

This is a slick name for a small wilddog.

Most Poms are never white so that is why this name is ridiculous and silly to give.

Even if your Pom becomes old, compared to other dogs it is filled with a feisty attitude which is what makes this name hilarious.

Much like a tiger, this dog can be rather loud when it is yapping away.

Similar to the things that cheerleaders carry when cheering, the dog looks similar to that.

The star and main attraction of the 1997 film Shiloh.

This is the name of a sweet lady in the animated film Anastasia.

From the film Ruthless People, this was the name of the character Sam’s dog.

This is the name of the dog from the comic strip Red and Rover.

This was the name of the dog that was first trained guide dog in the US.

One of the dogs in the 1955 Disney film Lady and the Tramp.

The name of the title role in the comic strip Buckles.

Arguably, the oldest dog that ever lived on the earth and one of the most popular dog names out there for female dogs.

This dog is in the Guinness Book of World Records for being the oldest dog to ever live.

The Pomeranian is a beautiful dog that will undoubtedly bring joy into your life. Its personality and appearance are unique in its own right and it is definitely certain that any dog owner that has this dog has their own will be delighted.