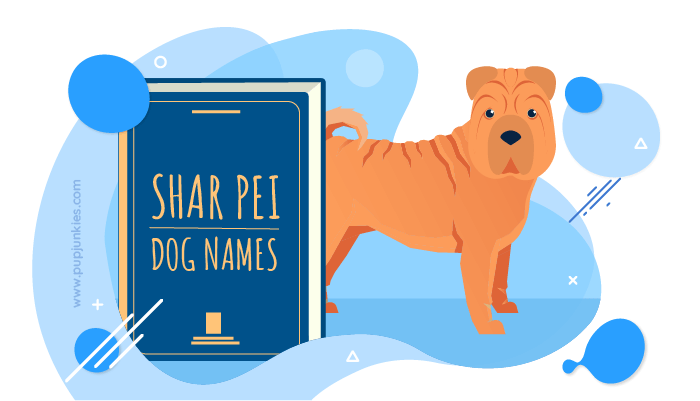 Pronounced shar-pay, the Shar Pei dog is a funny looking dog that is primarily known for its deep wrinkles, brown skin, and excessively black tongue (so dark that it may appear ill).

It originates from China and its name translates to mean ‘sand skin’ (in reference to the color and texture of its skin).

Possessing short and rough coat, these dogs start off as young pups with what looks like excessive loose skin, and eventually grow into it as they get older.

Coming in a wide variety of color from red, fawn, black, brown, and cream, the Shar Pei was named as one of the rarest dog breeds in TIME Magazine.

They have triangular ears and have a thick tail that is strangely rounded at the base. It is no doubt that in terms of appearance, they are quite unique and funny looking. 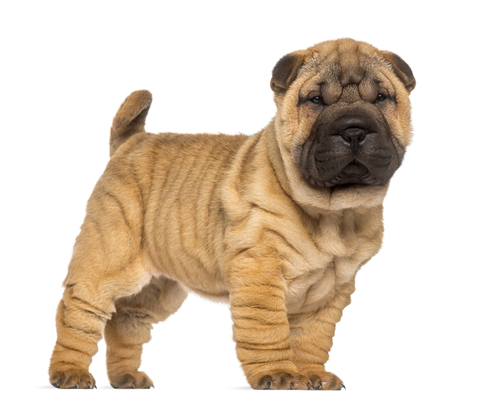 Some of the names below are part of a list of popular male dog names, but also recommended monikers that fit the overall look or feel of the Shar-Pei.

A popular name with thick dogs like the Shar Pei.

While this dog does not have a shaggy look, it is quite popular for male dog names.

A simple name for a dog that is usually small.

This is great for any hound with an intimidating appearance.

This is the name of a tough dog like the Shar Pei.

A short name for dogs that may look rather silly.

This is for energetic male dogs.

A popular name for any pups that have an air of uniqueness.

A male dog name for dogs that have a strong build.

A name that is relatively straightforward.

The list below tries to provide the best list of names that are befitting your Shar-Pei’s appearance or personality, but are specifically great for females.

This is chosen as one of the most popular female dog names.

A name meaning beautiful, it can be used to describe a dog that might not be known for its beauty.

A name that fits the look of your adorable Shar Pei.

A highly popular choice for any female dog.

This is a name that interestingly enough, fits the appearance of your dog.

This is great for any dogs that are short and small.

A popular choice amongst dog owners that own small dog breeds.

A popular name that grew to be loved by owners all over the world after the film Lady and the Tramp.

A simple name that can be applied to any loving female dog.

Naming your Shar-Pei after a character in a movie or a dog from a famous film is the best way to give a name that is fashionable, unique, and possibly recognizable by many.

A name from the movie Star Wars: The Empire Strikes Back.

A name and character from the Disney animated film Bambi.

This is a character and protagonist from the movie Gladiator.

A name describing the character from The Lion King.

The main character from the film Ferris Bueller’s Day Off.

A sweet French name and character from the movie Twilight.

The main character from the movie Juno.

A sturdy name of the boxer played by Sylvester Stallone from the movie Rocky.

The character from the film Walk the Line.

This is an ideal name for the character in The Lion King.

A name meaning warm in Chinese, a perfect word to describe the Shar Pei.

This means energetic in Chinese, and that is something that can describe this dog.

An interesting name that means scholar in Chinese.

Fast in Chinese, and one that is opposite to the Shar Pei, which is what makes it unique.

In Chinese, this means charming, virtuous, an ideal word to describe the Shar Pei.

A cute way of saying sweetie.

Meaning joyful in Chinese, and a great way to describe the Shar Pei.

This is exactly what the Shar Pei is – delightful.

The appearance of this dog makes you think of this name.

The small chubby size of this dog reminds you of when you say the word ‘bonzai’ when jumping into a pool.

A name that describes the dog’s mighty strong build.

A name that refers to its dinky size when it is small.

Due to its wrinkly skin, its face has the appearance of a pumpkin.

A funny name that is perfect for the look of this dog.

The Shar Pei has the appearance of a mutt.

This dog may look intimidating when it grows old, but when it is young, it is an absolute companion.

The look of this dog fits that of the plain name Jack.

This name was unavoidable, since it is similar to its actual name of the breed.

This one is obvious, since the dog has so many wrinkles.

This is referring to the pumpkin like features of its face.

A name that refers to the many layers of wrinkles that exist in its loose skin.

This is a name that refers to the wrinkles.

Another name that points out the flabby and wrinkly quality of the dog.

A play on its appearance, since loose refers to the wrinkly skin, and cannon pointing to its round figure.

A name that is funny and ironic because it does not look anything like a flower.

A silly name that refers to how old the dog looks.

Another one of Ariana Grande’s dogs.

This is also another one of Ashley Benson’s dogs names.

A popular dog name, but also the name of Tyler Blackburn’s dog.

The Terrier in the British TV series Come Outside.

A Labrador Retriever from the first family dog of comic strip Family Circus by Bill Keene.

The name of the Siberian Husky from the the 1995 animation film Balto.

The highly trained Dobermann from the TV series Magnum PI.

The name of the breed seen in the TV series Hart to Hart.