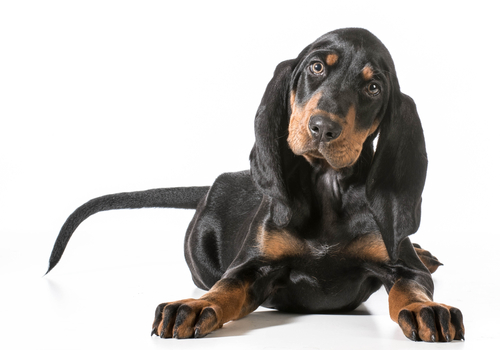 The Coonhound dog breed is a scent hound and the member of the hound group. This hound breed is specially known for coon or raccoon hunting, hence their name. These breeds were originally from the United States.

There are total of 6 breeds of the Coonhound and the first to be officially registered was the Black and Tan Coonhound.

Along with those two, the other remaining are the Redbone, English, Bluetick, Treeing Walker and the Plott Hound. These dogs are one of the first working dogs.

Some of the names below are part of a list of popular male dog names, but also recommended monikers that fit the overall look or feel of the Coonhound dog breed.

It is a good and rugged name for a hunting dog.

Since foxes are professionals in hunting, this title can be anyhow suitable for coonhounds.

This name would perfectly suit for this quick moving breed.

The hawk is an agile and strong hunter. Therefore, the qualities do match with the Coonhound and eventually sounds suitable as for a name.

A classic name which works for any hunting dogs.

This name can be suitable for black-coated Coonhounds.

It means great and undefeatable fighter. This is a name that your hound should deserve for its strong physical.

This is a great name for black-coated hound.

It means well-known and defines the legendary abilities of hunting the Coonhound possesses.

He was Roman emperor who was famous for his cruelty.

The list below tries to provide the best list of names that are befitting your Coonhound’s appearance or personality, but are specifically great for females.

It is an Arabic word which means ‘flower’. This name can be good for your lovely and sweet Coonhound.

It is Spanish for ‘baby’. This name is a great one for your cute little hound.

It means white and is a suitable name for white-coated Coonhound.

This is a lovely female name for a dog.

It is a short and cute version for Elizabeth and would be great as a name for your hound.

It means oozing attractiveness or charm which is perfect to describe your dog’s simple irresistible nature.

The famous character whose long hair can be climbed onto.

It is an attractive purplish-blue color which is a popular name for your dog’s attractive beauty.

This name is derived from Babylonian goddess of love.

It is a Spanish name for girls and a great name to give a speedy female dog.

Naming your Coonhound after a character in a movie or a dog from a famous film is the best way to give a name that is fashionable, unique, and possibly recognizable by many.

It was the Coonhound name in the movie called ‘The Fox and The Hound’ of a dog that befriends a young fox.

It is the name of the yellow companion of the orange cat Garfield.

It is a name of the wolfhound dog breed that was part of history. It is said that the King Connacht of Ireland paid 6,000 cows for the dog in the 1100s.

This cool dog appeared on the advertisement for flying “A” Service Station.

It is the name of a Bloodhound breed which was the dog in the animated Cinderella movie.

It is the Great Dane that featured in the movie, ‘The Ugly Dachshund’.

It is the name of the Black and Tan Coonhound dog breed from the film The Duke.

It is the name of the dog from the Disney film,’ The Aristocats’. This can be a wonderful name for your adorable Coonhound which is another member of the Hound family.

It is well known dog in the film, ‘The Biscuit Eater.’

It was a tiny dog in the animated movie called ‘Oliver and Company’.

It means ‘love’ in Hawaiian. Love is everything.

It is Italian for ‘dear, and there could be no name that sounds as lovely as this for your dog.

It means bright and is an ideal name for your dog that believed to be shining bright in its future.

This is a Japanese name and means little goddess. This is probably a noble name for your sweet little Coonhound.

A name of a beautiful island in the Southern Indonesia.

This would indeed be a fantastic name for your dog.

It means “dawn” and is simply a beautiful name for your hound.

A Hindi word for the goddess Indra, and is befitting the light Coonhound dog breed.

A Tibetan term for overcoming the negative, perfect for such a positive dog.

The fictional superhero with razor-sharp blades coming out of the backs of his hands. This title well suits this breed as a hunter dog.

A classy name that fits the classy look of this breed.

Describing the quick agility of the Coonhound.

A sweet name for a dog that is highly affectionate.

This name is a popular choice to describe the lovable nature of the Coonhound.

This is an absolutely perfect name to describe the Coonhound’s friendly nature.

For some reason many dog owners seem to choose this name when owning a Coonhound.

This can be used to describe the howling quality of this breed.

This may be in reference to the dog’s muddy appearance.

A name that well describes the dog’s noble look.

It is a hairless cat from the comedy film, ‘Austin Powers’. This might fit the hairless appearance of the Coonhound.

It has no meaning but is hilarious name to give a dog.

Are you a Cappucino lover? This is a word fusing the word puppy and cappucino together.

It means graceful in movements, which sort of fits the gracefulness of the Coonhound.

It is named after the Looney Toons duck, but also is a silly name to give a dog.

A name that is rather hilarious to give to a dog but might fit the overall zero fat-look of the Coonhound.

This name is after Ellen De Generes, the well -known famous comedienne and is sort of funny to give to a dog like the Coonhound.

A silly name to give a dog in general.

It is another funny name for your dog since it is so straightforward at the actions a dog like the Coonhound does to show affection.

A sound that a cow makes and can be a rather funny name.

It is the adorable young lion in the movie, ‘The Lion King.’

The name of the dog in the animation Oliver and Company.

The name of the main dog in the movie Underdog.

An Alaskan Malamute from the TV show Challenge of The Yukon.

The name of the dog from the Mr. Boffo comic strip.

The name of the pet in the TV series Richie Rich.

A pug in the advertisement of Hutch cellular service in India.

The dog from the advertisement for Alpo dog food from the year 2005.

The name of the dog in the popular TV series Lost.