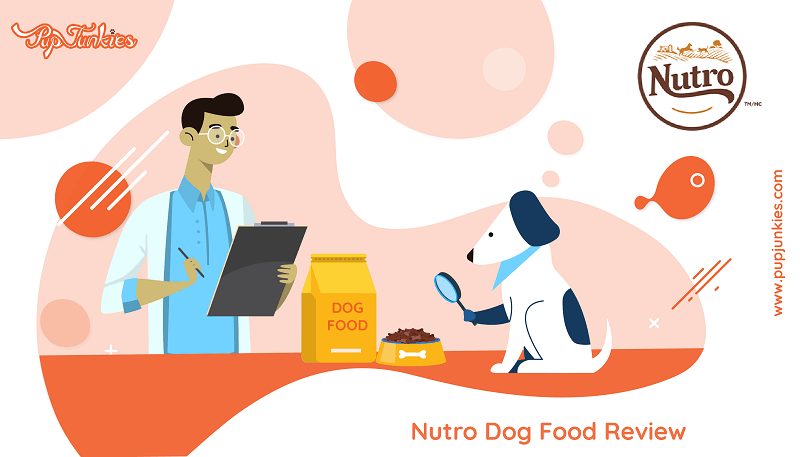 The Nutro Company makes premium foods for dogs and cats. In the 1990s and early 2000s, Nutro MAX was one of the most popular dog foods sold in United States pet stores.

Nutro Adult Lamb and Rice was the #1 lamb and rice dog food sold in the U.S. in pet specialty stores in 2006.

Recently, the U.S. Food and Drug Administration (FDA) identified Nutro as one of the brands fed to dogs that had frequently appeared in the dietary dilated cardiomyopathy (DCM) cases they had been studying.

Is Nutro a good brand?

Should you feed this food to your dog?

Check and see with our unbiased review.

Our reviews are based on extensive research and years of professional knowledge of dog food brands. In order to remain objective, we do not accept gifts of free products or write sponsored posts on this site.

We’ve Nutro dog foods closely and graded the brand according to the PupJunkies standard. Our criteria include ingredients, quality, customer experience, recall history, working with veterinary nutritionists to formulate the food, nutritional standards, research, and price. 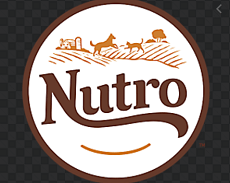 The Nutro Company is a subsidiary of Mars Incorporated, one of the biggest pet food makers in the world. Nutro has headquarters in Franklin, Tennessee. The company originated in the 1920-30s in California.

Nutro has been the subject of several attempts to show that their foods contain adulterated substances or excessive levels of some minerals over the years but these efforts largely died out.

These efforts occur with many large commercial dog food brands, often without success. Some complaints may be valid but they may also be due to a one-time problem or a problem with an owner’s dog. It’s usually very hard to prove these claims.

Nutro dog foods are sold throughout the world today. Their foods, such as Nutro Adult Lamb and Rice, were especially popular before grain free dog foods became so popular a few years ago. At that time Nutro began to develop some of their own grain free formulas.

Nutro is one of the brands singled out by the U.S. Food and Drug Administration as being fed to multiple dogs in the cases they have been examining for dilated cardiomyopathy. The data appears to show that various Nutro recipes were involved.

The FDA has not arrived at a definitive cause of the dietary DCM problem and it has not advised dog lovers to stop feeding grain free diets to their dogs.

The FDA has suggested that you avoid dog foods that use legumes (in some form) as main ingredients.

Per the FDA, “We generally consider a ‘main ingredient’ to be the first 10 ingredients listed in a food’s ingredient list before the first vitamin or mineral ingredient.”

You should also be cautious about dog foods that “split” ingredients and use multiple legumes lower in the ingredient list since if they are combined they will make up a large amount of the food.

According to Nutro, the company sources their ingredients from trusted farmers and suppliers and rigorously tests for quality and safe. They “travel the world to locate and source the quality ingredients used in our recipes.” Per the company’s FAQ section:

“We work with chickpea farmers in Canada and North Dakota, sugar beet farmers in Chile, Europe and other parts of South America, pea and lentil farmers in North Dakota, rice farmers in Missouri, Arkansas, Louisiana and California, lamb farmers in Australia and New Zealand and many others around the world to source our high-quality ingredients.”

Nutro also states that they never add artificial preservatives or flavors to their foods. Customers have a choice when it comes to buying foods with grains, chicken by-products, or soy protein.

The brand was also part of the Menu Foods/melamine recall in 2007, along with dozens of other companies.

Nutro treats were recalled in 2015.

What kinds of dog food does Nutro offer?

Their dog food product lines include:

Many of the Nutro foods are available for different lifestages (puppy, adult, senior, weight management), as well as for different sized dogs (Toy, small, medium, large). The company also makes several kinds of treats and biscuits for dogs, as well as cat foods.

Nutro is also associated with Wild Frontier, Crave, and Greenies, also made by Mars Incorporated. Wild Frontier, until recently, was part of the Nutro product line.

We’re taking a look at three of the top-selling Nutro dog foods as found on Chewy.com. 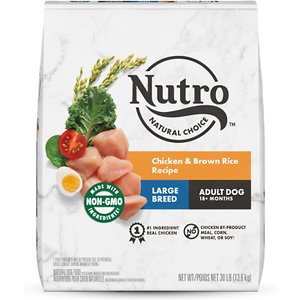 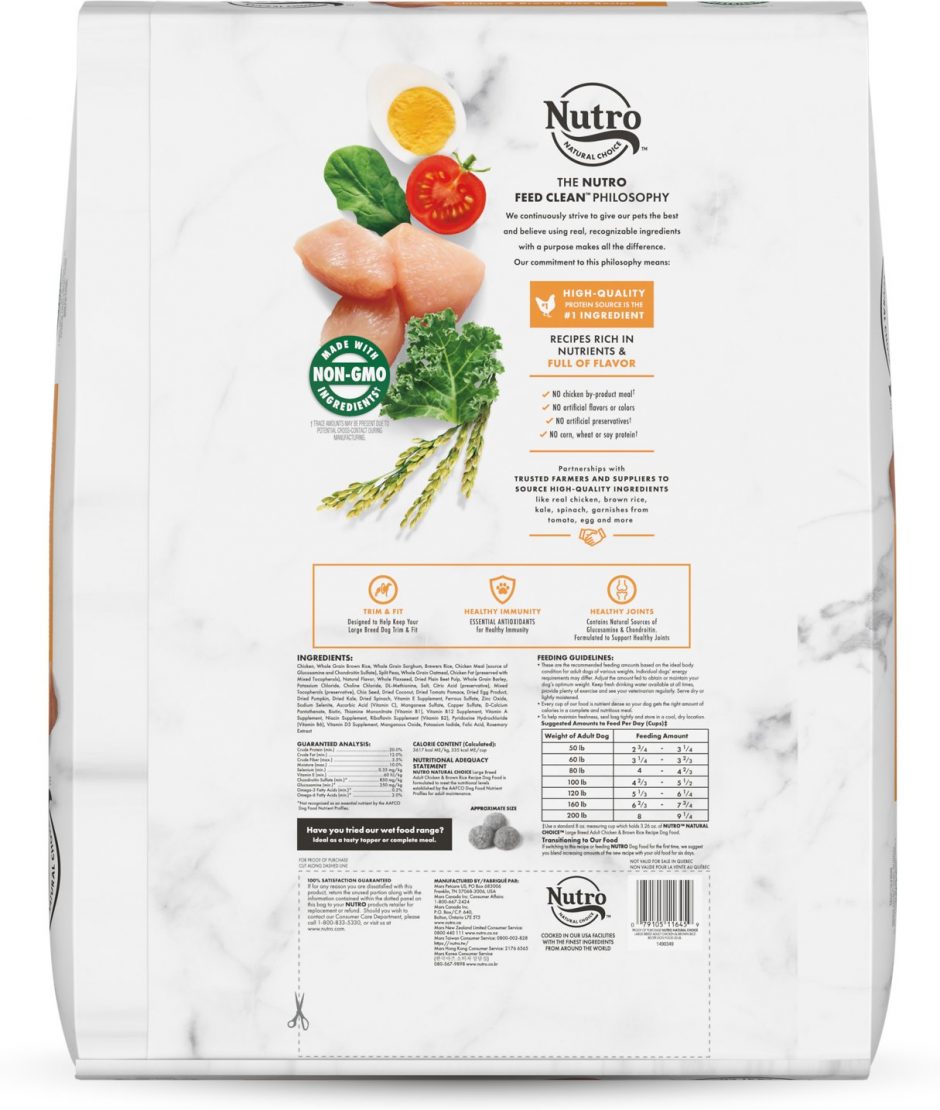 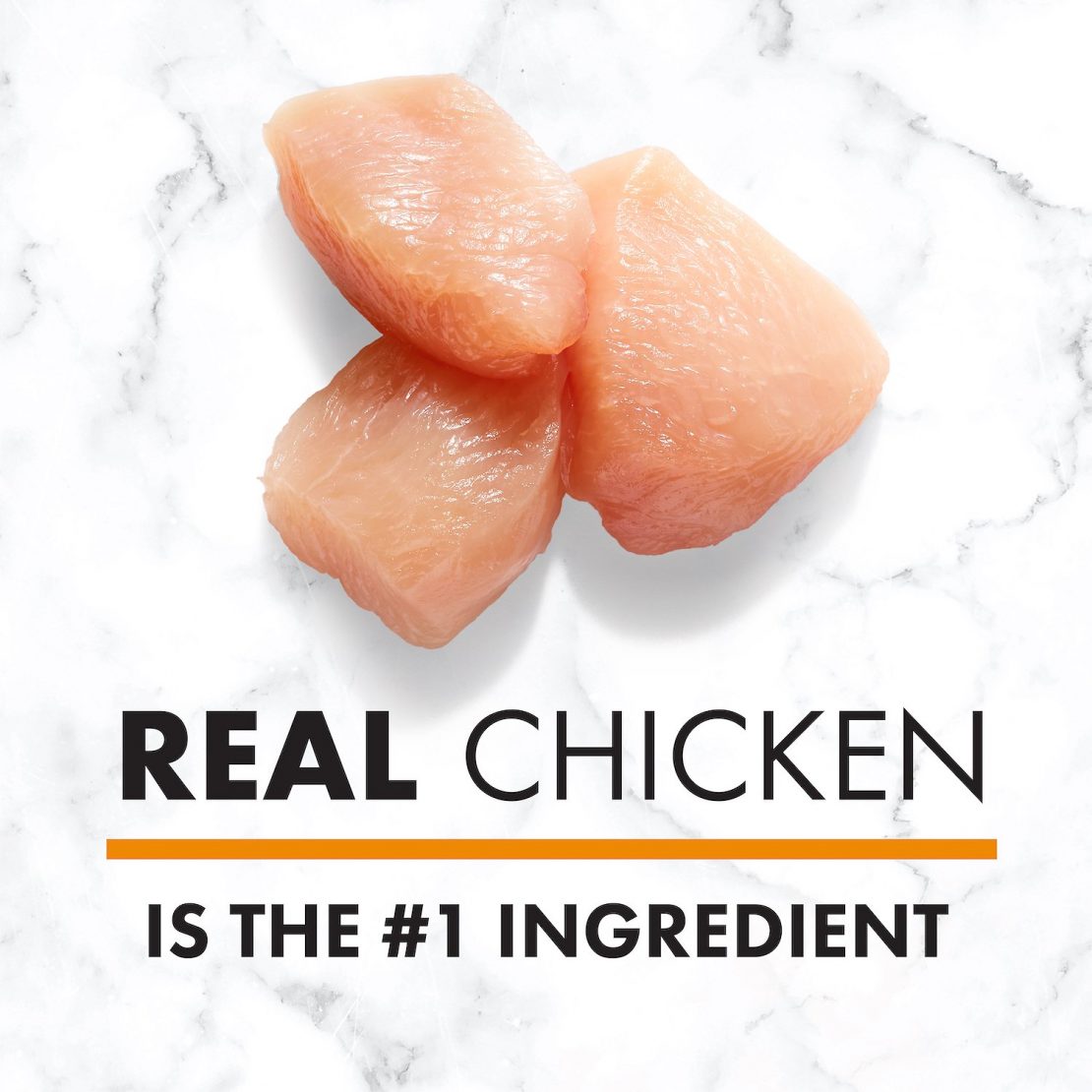 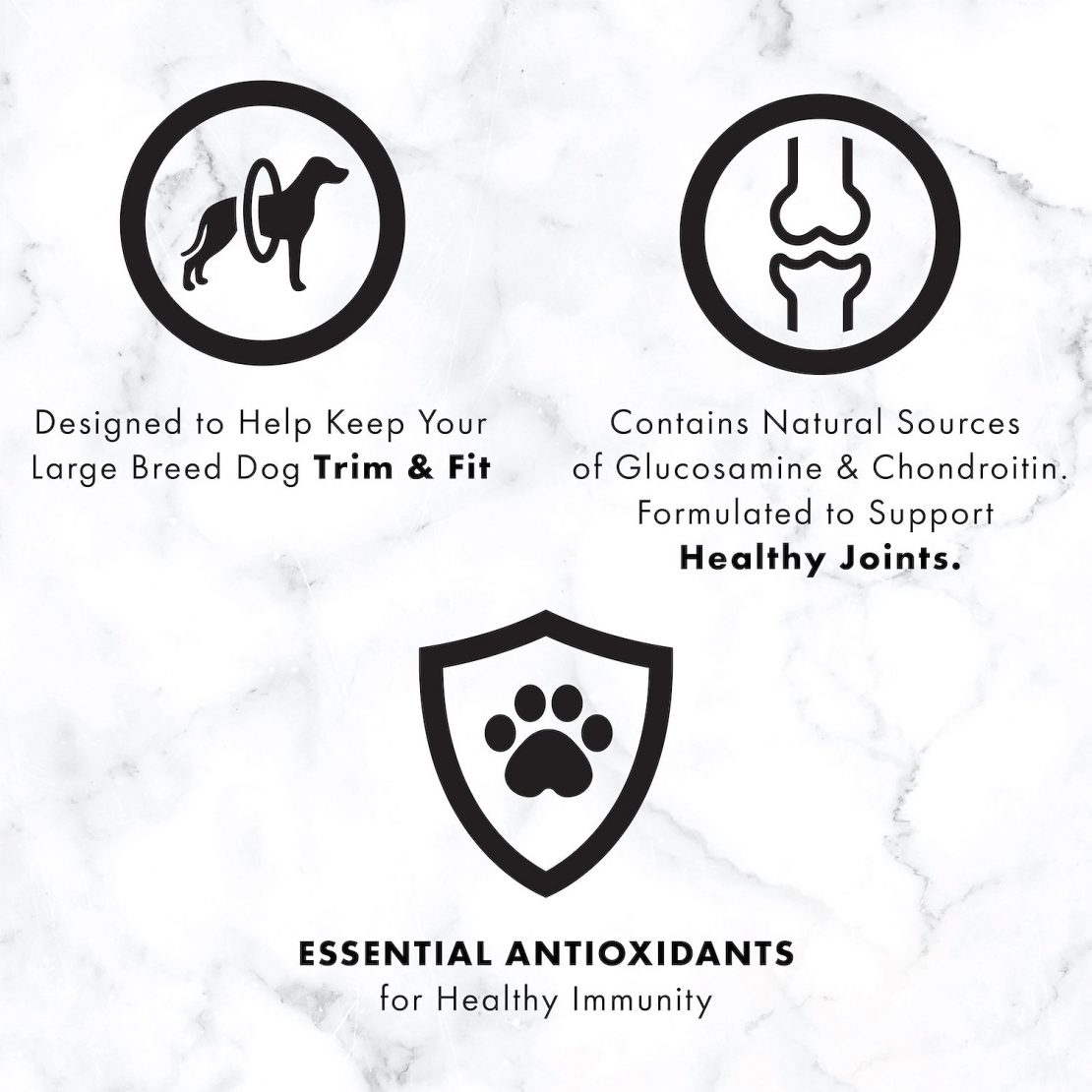 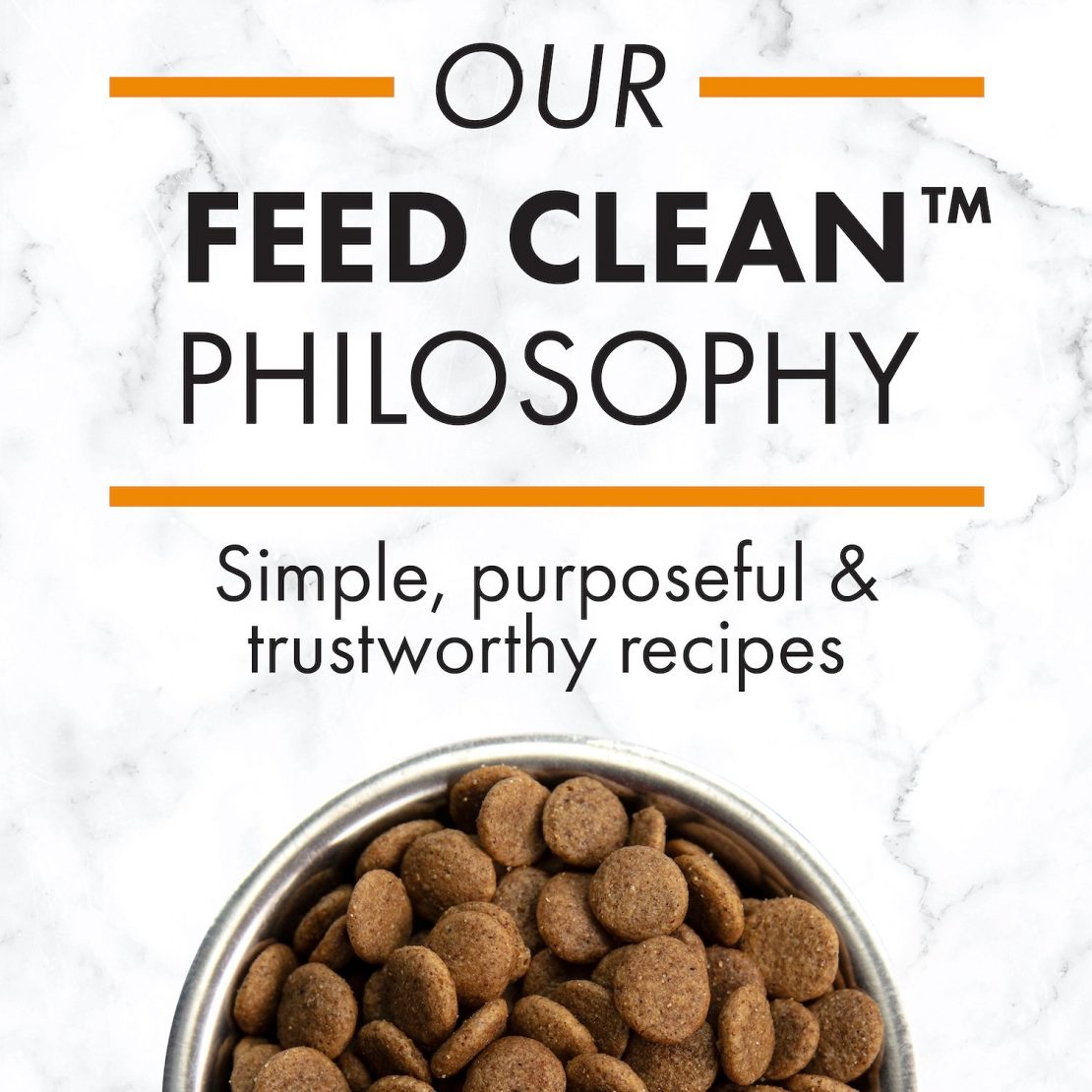 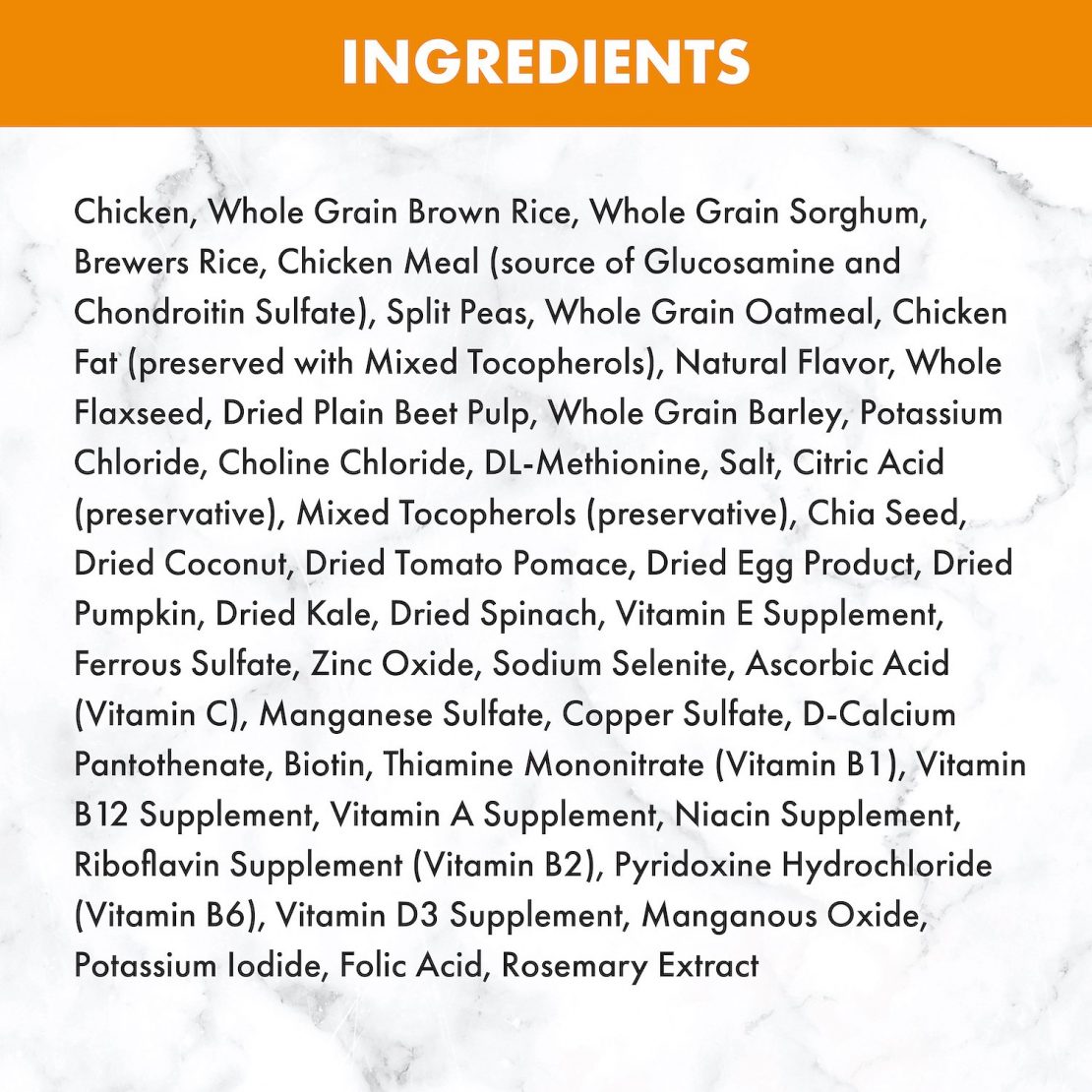 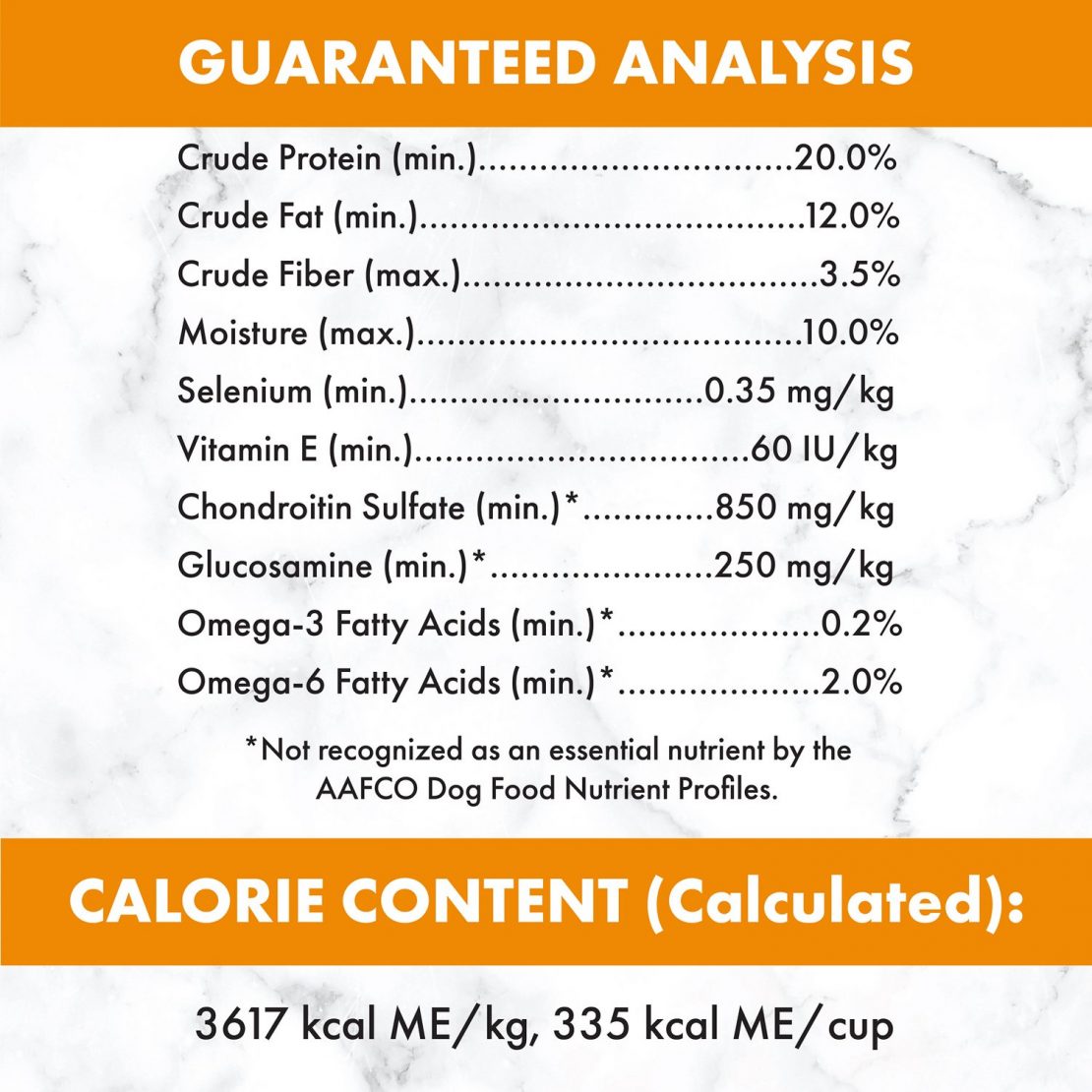 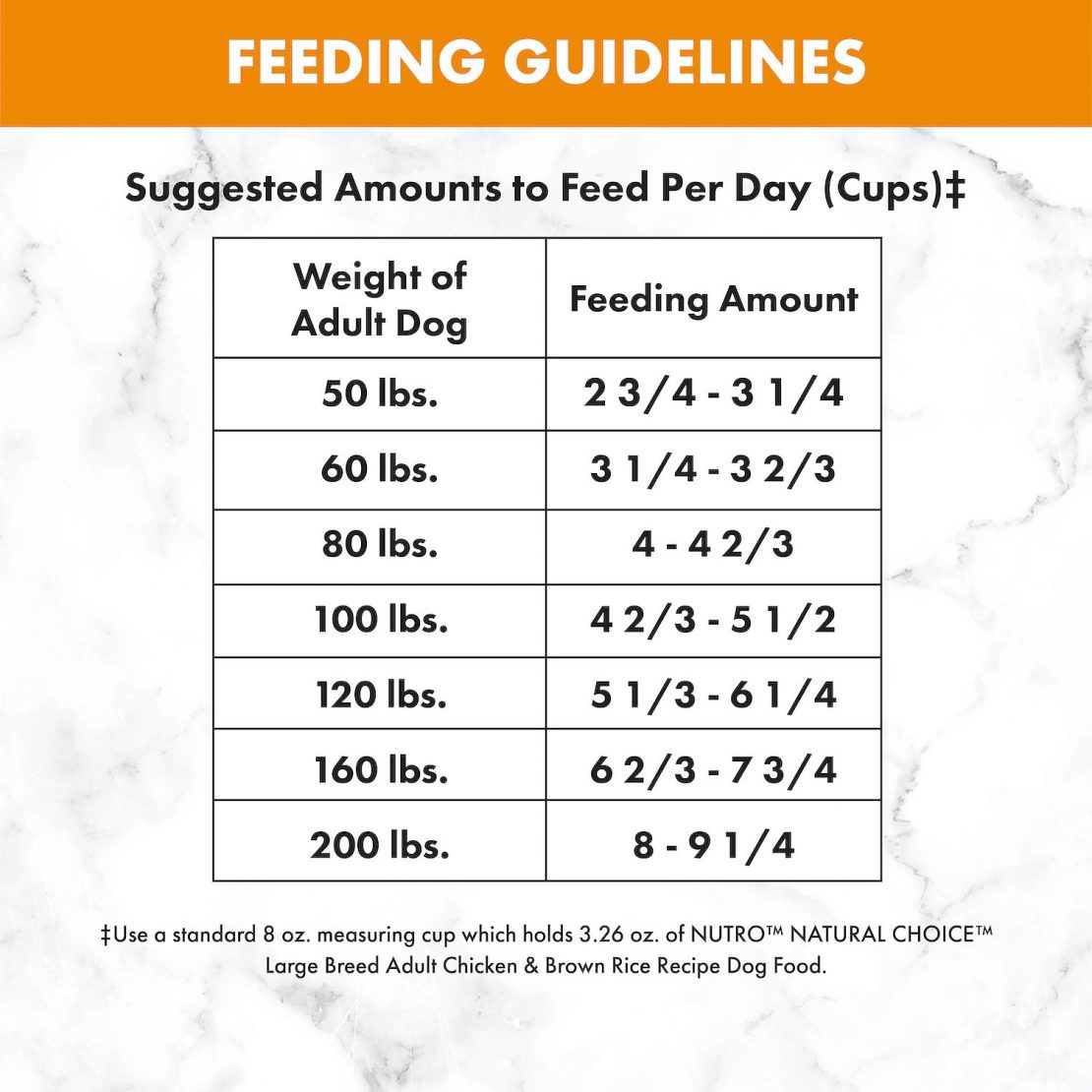 Ingredients: Nutro Wholesome Essentials Large Breed Adult Farm-Raised Chicken is a non-GMO food with no corn, wheat, or soy. It does contains grains/cereals such as whole brown rice and whole grain sorghum. This is a large breed food but Nutro makes similar foods for dogs of other sizes.
Here are the ingredients:
New Formula: Chicken, Chicken Meal (Source Of Glucosamine And Chondroitin Sulfate), Whole Brown Rice, Brewers Rice, Split Peas, Whole Grain Sorghum, Chicken Fat (Preserved With Mixed Tocopherols), Sweet Potato, Dried Plain Beet Pulp, Natural Flavor, Lamb Meal (Source Of Glucosamine And Chondroitin Sulfate), Whole Flaxseed, Potassium Chloride, Salt, Choline Chloride, DL-Methionine, Mixed Tocopherols and Citric Acid (Preservatives), Pea Fiber, Zinc Sulfate, Niacin Supplement, Calcium Carbonate, Biotin, Vitamin E Supplement, Iron Amino Acid Chelate, D-Calcium Pantothenate, Riboflavin Supplement (Vitamin B2), Selenium Yeast, Vitamin B12 Supplement, Copper Amino Acid Chelate, Pyridoxine Hydrochloride (Vitamin B6), Manganese Amino Acid Chelate, Vitamin A Supplement, Thiamine Mononitrate (Vitamin B1), Vitamin D3 Supplement, Potassium Iodide, Folic Acid, Rosemary Extract.
Split peas are the fifth ingredient here which suggests they make up a large percentage of the food. According to the Association of American Feed Control Officials (AAFCO), Brewers Rice are the leftover broken rice pieces from rice and beer production. They are not aesthetically pleasing but they have the same nutritional value as ordinary white rice.
“Natural flavor” is a vague term and can mean any kind of flavoring (usually meat). The problem with it is that it can contain a form of monosodium glutamate (MSG).
According to the dry matter basis (DMB), this food has 23.3 percent protein, 14.4 percent fat, and 3.9 percent fiber. This formula has 58.3 percent carbohydrates.
(If you’re thinking this is incorrect, Chewy.com customer service says the food has 52.25 percent carbs/as fed and that was close to our calculation before we figured for DMB).This food has 358 kcal/cup.Our rating for this food is 3.5 out of 5 stars.
2. 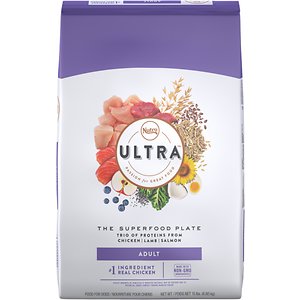 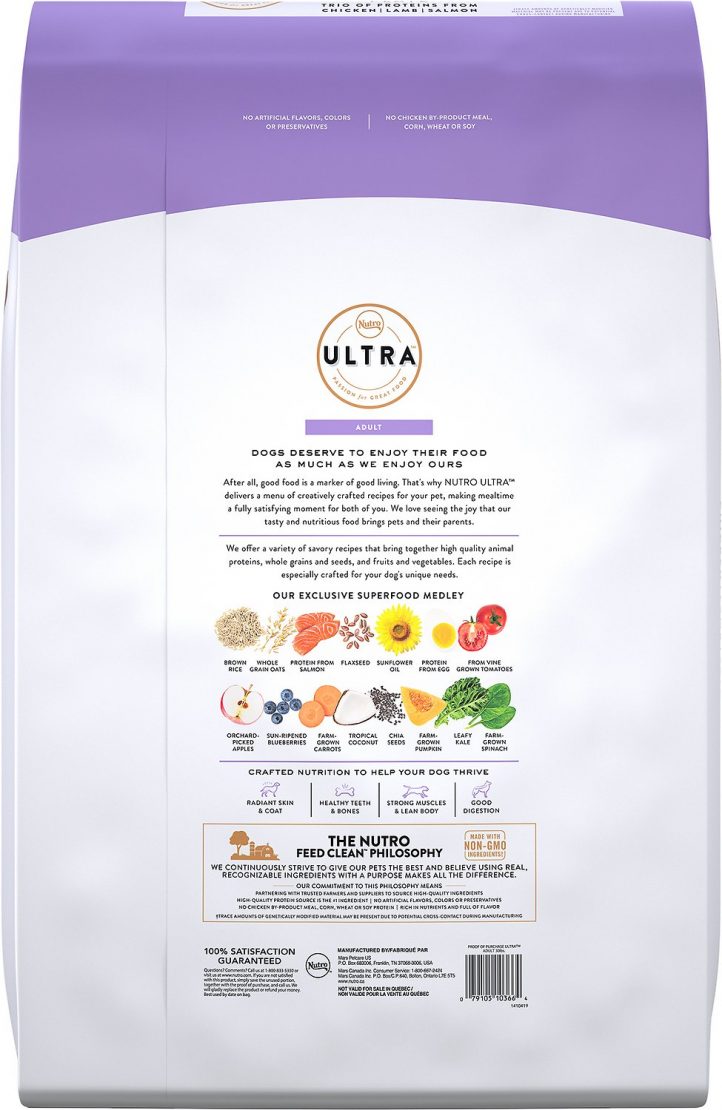 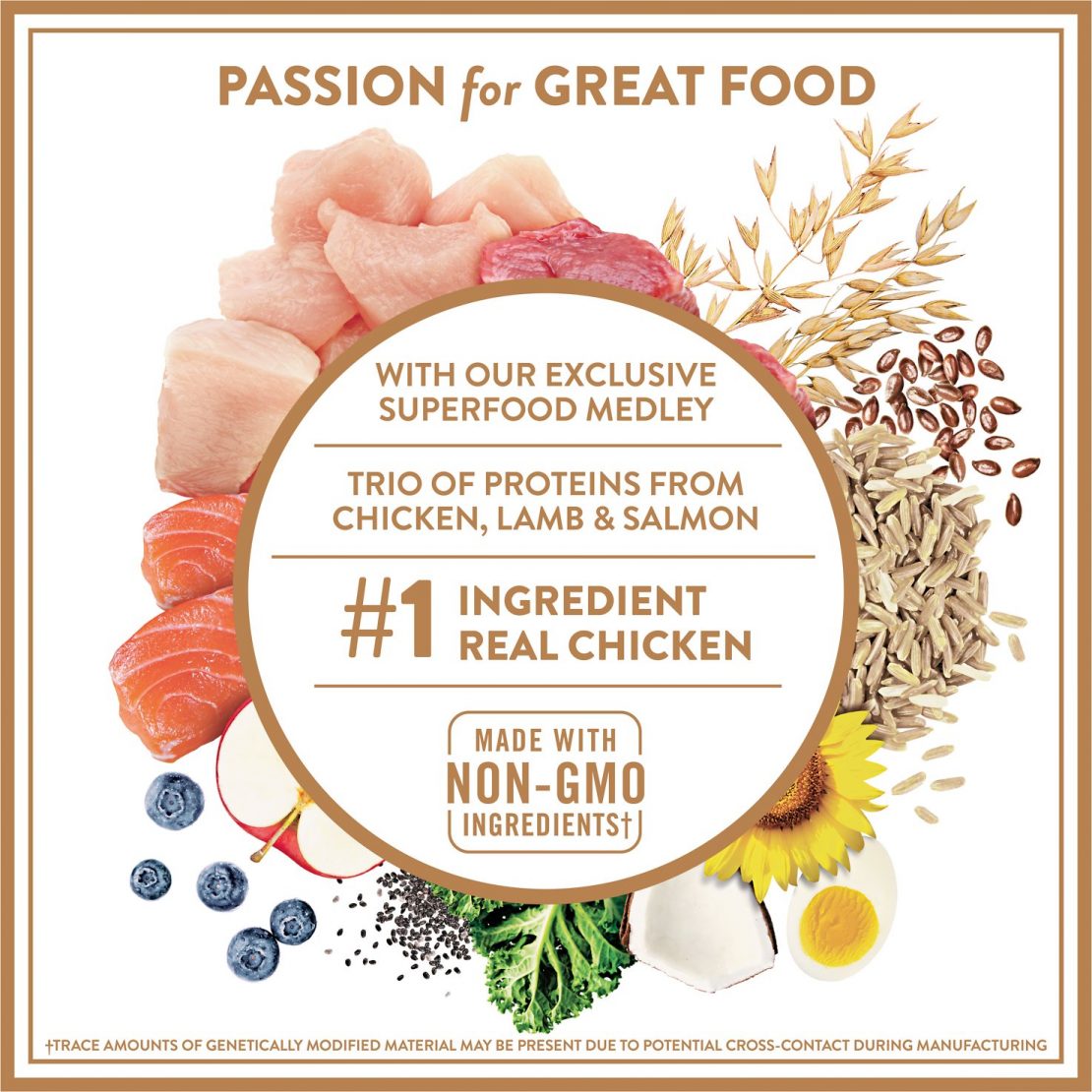 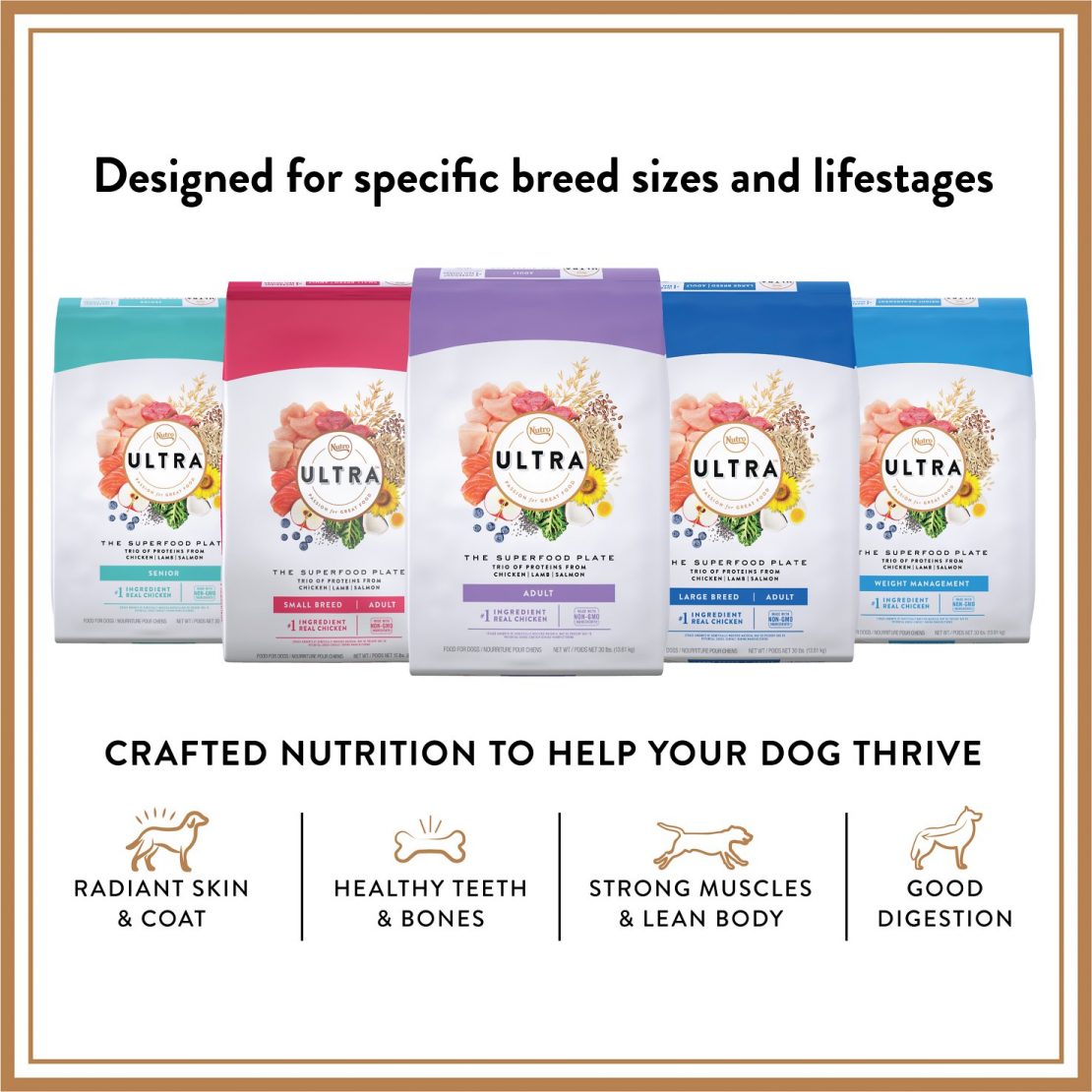 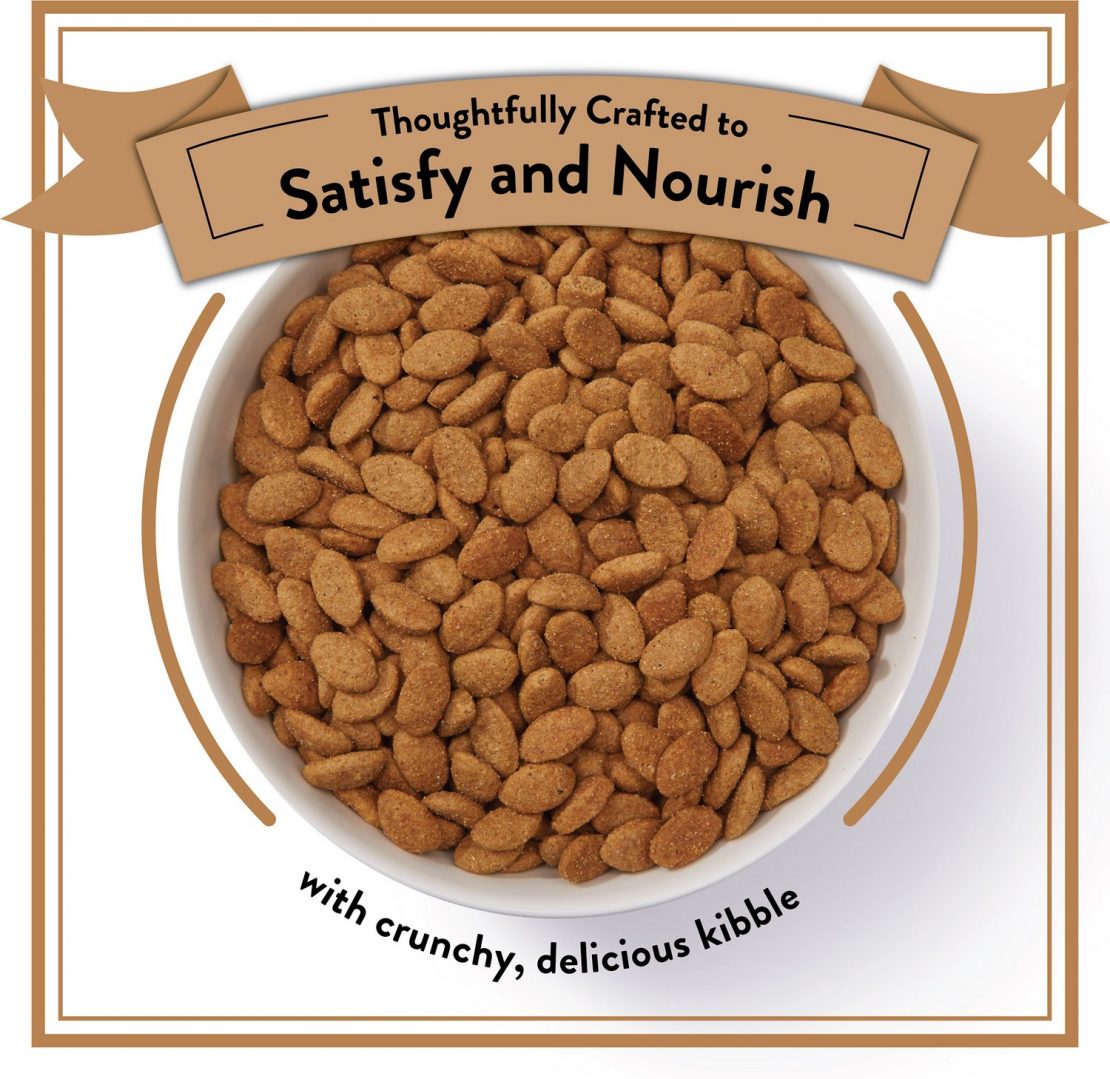 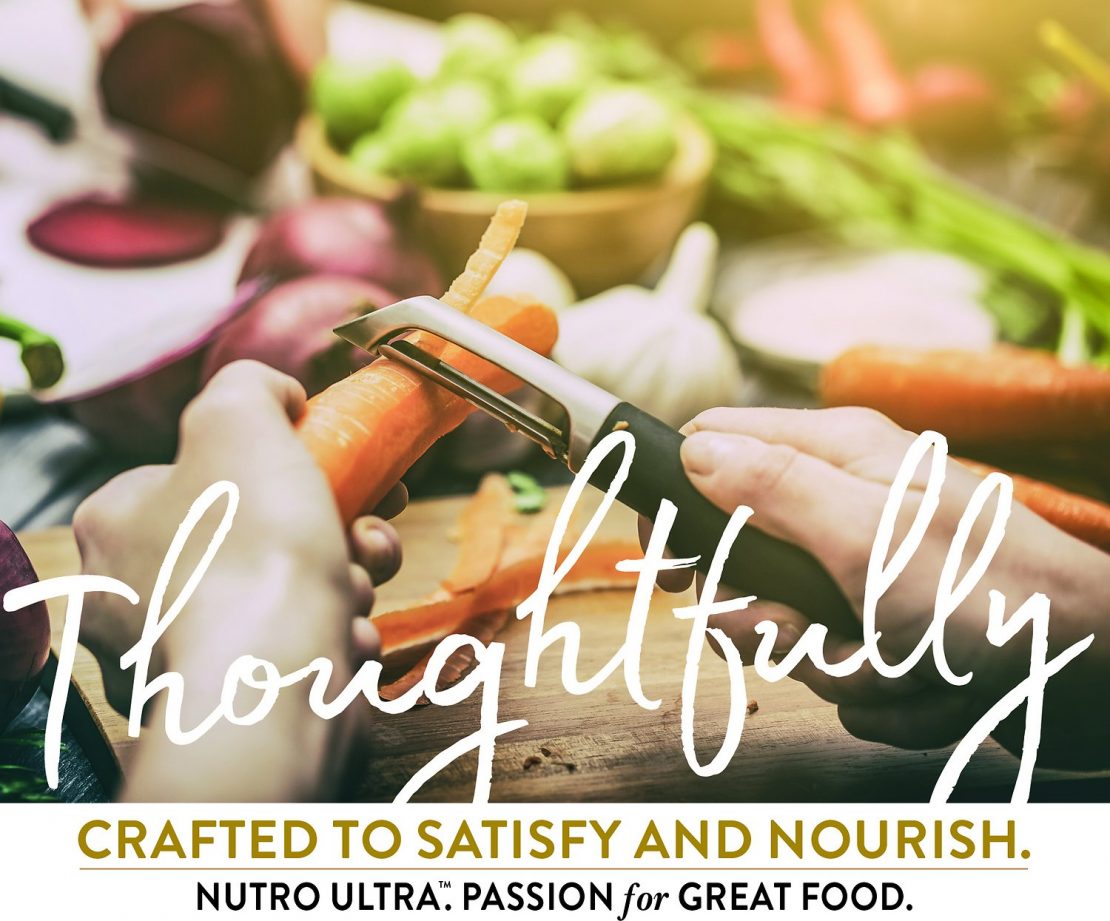 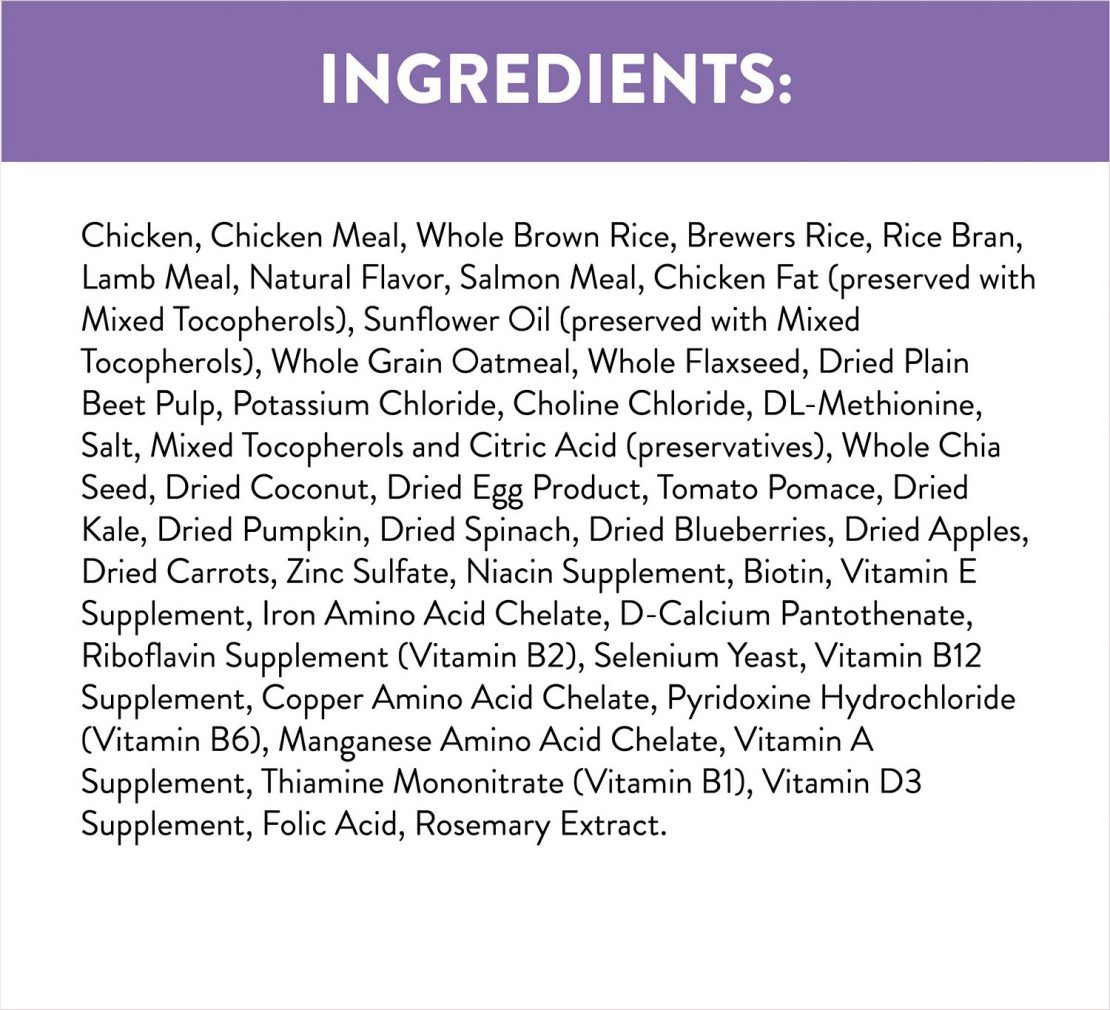 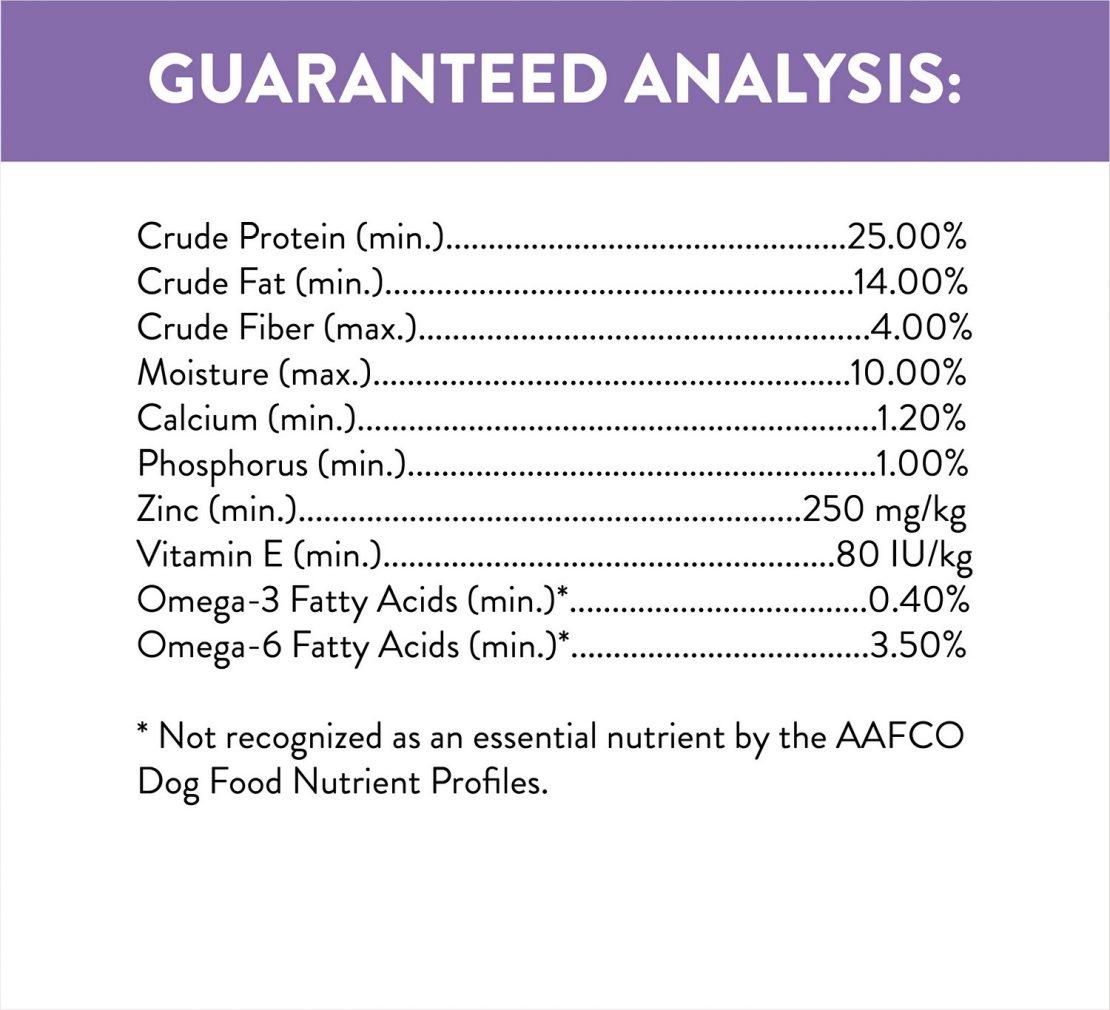 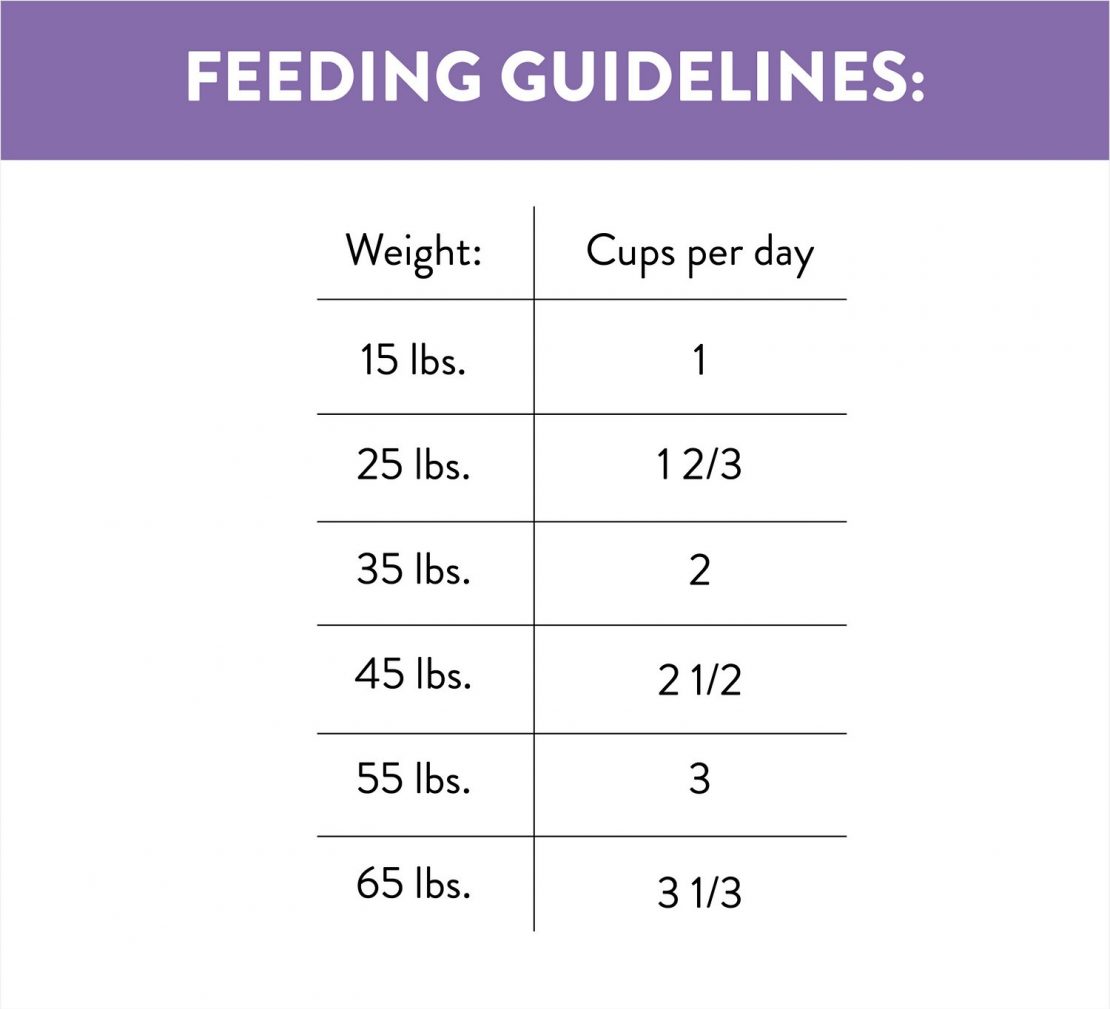 Ingredients: Nutro Ultra Adult Dry Dog Food is another bestseller on Chewy.com. It contains no corn, wheat, or soy, and it is pea-free. This food has no artificial colors, flavors, or preservatives.
Here are the ingredients:
Chicken, Chicken Meal, Whole Brown Rice, Brewers Rice, Rice Bran, Lamb Meal, Natural Flavor, Salmon Meal, Chicken Fat (preserved with Mixed Tocopherols), Sunflower Oil (preserved with Mixed Tocopherols), Whole Grain Oatmeal, Whole Flaxseed, Dried Plain Beet Pulp, Potassium Chloride, Choline Chloride, DL-Methionine, Salt, Mixed Tocopherols and Citric Acid (preservatives), Dried Coconut, Whole Chia Seed, Dried Egg Product, Tomato Pomace, Dried Kale, Dried Pumpkin, Dried Spinach, Dried Blueberries, Dried Apples, Dried Carrots, Zinc Sulfate, Niacin Supplement, Biotin, Vitamin E Supplement, Iron Amino Acid Chelate, D-Calcium Pantothenate, Riboflavin Supplement (Vitamin B2), Selenium Yeast, Vitamin B12 Supplement, Copper Amino Acid Chelate, Pyridoxine Hydrochloride (Vitamin B6), Manganese Amino Acid Chelate, Vitamin A Supplement, Thiamine Mononitrate (Vitamin B1), Vitamin D3 Supplement, Folic Acid, Rosemary
Chicken, chicken meal, and lamb meal are good sources of meat protein for dogs. We previously mentioned brewers rice has the same nutritional value as white rice.
Rice bran is the bran and germ layer of the rice and shouldn’t have the hull fragments except as they are unavoidable in regular milling. Still, these are usually considered less desirable kinds of rice.
We have previously mentioned the problems with “natural flavor” and the vagueness of what it might contain.
We have highlighted dried coconut in this ingredient list because this is the first time we have seen it used in a pet food. According to this story, coconut meal is being considered as a new starch in pet foods.
This food has 27.8 percent protein and 15.6 percent fat, according to the dry matter basis (DMB). It has 4.4 percent fiber. Our estimate of the carbohydrates in the food came out to 44.4 percent, DMB. It contains 358 kcal per cup.
Rated 4 out of 5 stars.
3. 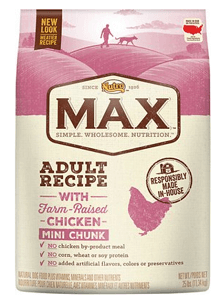 Ingredients: Nutro Max Mini Chunk Natural Chicken Meal & Rice Adult Recipe Dry Dog Food contains no chicken by-product meal, corn, wheat, so soy protein. It has no artificial colors, flavors, or preservatives, according to Nutro. This food is one of the company’s bestselling MAX recipes.
Here are the ingredients:
Chicken Meal, Whole Grain Sorghum, Brewers Rice, Chicken Fat (Preserved with Mixed Tocopherols), Dehydrated Alfalfa Meal, Chicken, Peas, Flaxseed, Natural Flavor, Whole Brown Rice, Whole Grain Oatmeal, Chickpeas, Potassium Chloride, Choline Chloride, Dl-Methionine, Salt, Zinc Sulfate, Niacin Supplement, Biotin, Vitamin E Supplement, D-Calcium Pantothenate, Riboflavin Supplement (Vitamin B2), Vitamin B12 Supplement, Iron Amino Acid Chelate, Copper Amino Acid Chelate, Selenium Yeast, Pyridoxine Hydrochloride (Vitamin B6), Manganese Amino Acid Chelate, Vitamin A Supplement, Thiamine Mononitrate (Vitamin B1), Vitamin D3 Supplement, Potassium Iodide, Folic Acid, Rosemary Extract, Decaffeinated Green Tea Extract, Spearmint Extract.
You might not think it, but alfalfa is a legume, like peas. This formula also contains peas in the first ten ingredients which raises concerns about the DCM issue. Chickpeas are also the 12th ingredient.
We have also mentioned the brewers rice and natural flavor above.
We can’t say that this food is bad for your dog since the FDA has not reached definite conclusions about the dietary cardiomyopathy problem but this formula seems to be trying to include both grains and grain free ingredients. It’s hard to say if it will work successfully.
According to the dry matter analysis for this food, it has 26.7 percent protein, 15.6 percent fat, 3.9 percent fiber, 46.1 percent carbohydrates, and 358 kcal per cup. Our rating for this canned/wet food is 3 out of 5 stars.

How much does Nutro Dog Food cost?

Nutro foods are very affordable. Ultra is their most expensive product line but even these foods are comparable to other moderately-priced premium dog foods.

What do customers think of Nutro Dog Food?

Many people like Nutro. We noticed on Chewy.com that the most popular foods seemed to be for large dogs. Their large-breed foods appear to be priced very affordably. Even their Ultra foods are reasonably-priced. There were lots of positive comments and few negative comments about the food.

In looking at foods on Chewy.com for this review we noticed that the most popular Nutro foods sold were those with grains. Some of the foods seem to have new formulas or there have been some minor changes in the last few months.

The Ultra foods look like they are good foods. We have some reservations about some of the other foods. All of the foods we looked at appear to have very high carbohydrate levels, from all of the product lines.  That includes grain free foods.

We recommend that you look at ingredients closely and follow the suggestions from the U.S. Food and Drug Administration to avoid foods that have a lot of legumes in the first several ingredients at this time.

Where is Nutro Dog Food sold?

You can buy Nutro dog foods from Chewy.com and other online retailers as well as many pet stores.

Carlotta Cooper is a long-time contributing editor for the weekly dog show magazine DN Dog News. She's the author of The Dog Adoption Bible, a Dog Writers Association of America (DWAA) award winner. In addition, she is an American Kennel Club Gazette breed columnist and the author of several books about dogs. She has been reviewing pet foods and writing about dog food for more than 10 years.
Connect with Carlotta: 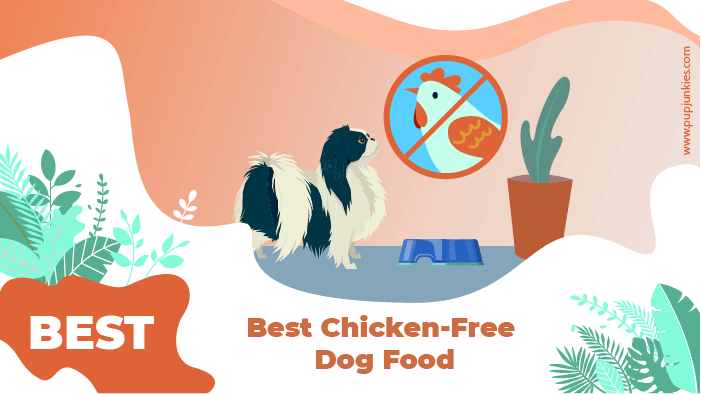 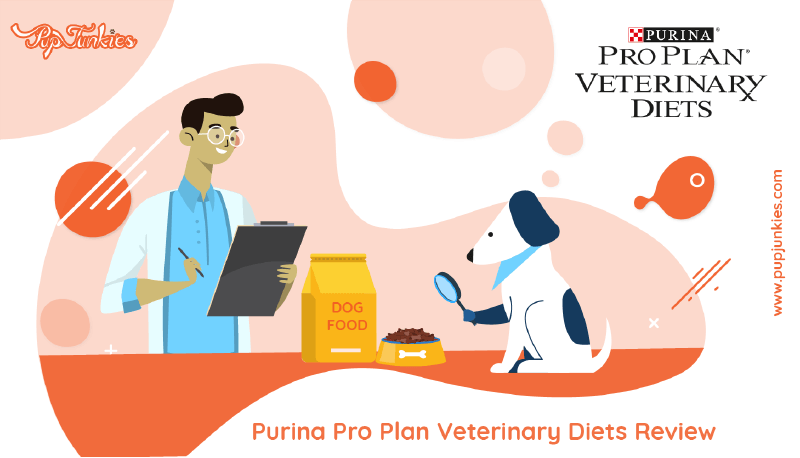 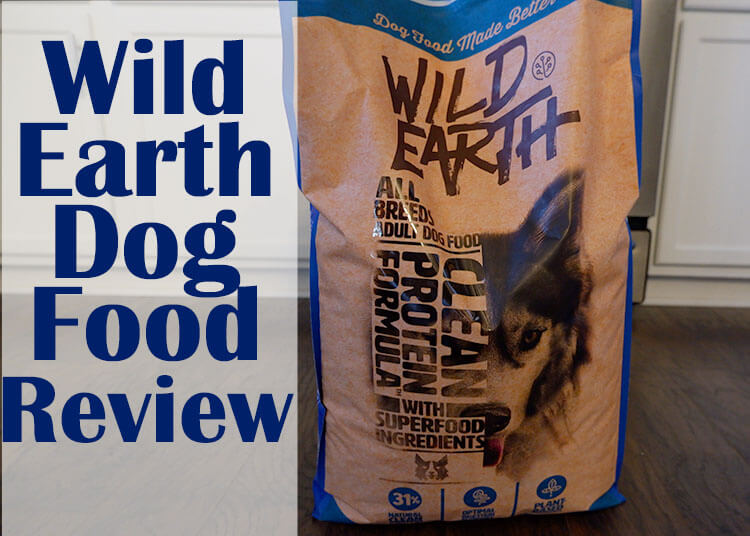