100 Most Popular Dog Names for American Bulldogs With Meanings 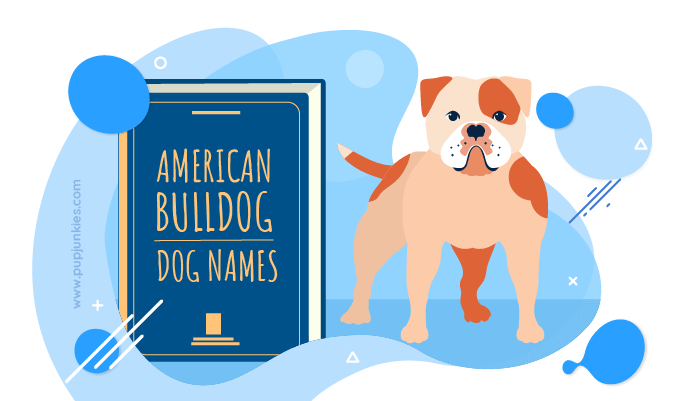 100 Most Popular Dog Names for American Bulldogs With Meanings

American Bulldogs, in addition to their unbearably lovable faces, have a charming personality that can become quite addictive for supporters of this breed.

They are hard-headed, stubborn and are known to be extremely challenging to train, but the resulting loyalty of their
companionship makes the grueling training process well worth the effort.

Some of the names below are part of a list of popular dog names, but also recommended
monikers that fit the overall look or feel of the American Bulldog.

● Bo – The name Bo is Slavic in origin and the definition of the name is “living.” It’s a great name for
American Bulldogs that have been rescued.
● Bruno – While the name might mean having brown hair, for many it conjures up images of a lumbering
white bulldog.
● Gizmo – Gizmo tends to be most popular among owners whose American Bulldogs.
● Baxter – This is a popular choice amongst American Bulldog owners.
● Happy – This name is American in origin and is obviously used for American Bulldogs who appear to be
smiling.
● Zeus – People who see their American Bulldog as tough and fearless often choose this name.
● Riley – A highly popular unisex name for any dog since it means valiant.
● Duke – This is another of the most popular names in dog naming history. It was made even more
popular by the cartoon Great Dane named Marmaduke.
● Buddy – A great choice for a companion dog.
● Scout – It is a great name for any dog that is out there to protect their owner.

The list below tries to provide the best list of names that are befitting your American Bulldog’s
appearance or personality but are specifically great for females.

● Jasmine – Many dog owners began to choose this name after the Disney character princess.
● Sadie – This name means princess and royalty and was once among the most popular for dogs.
● Lucy – The name means one who brings light.
● Trixie – This name just seems to belong to a playful and energetic American Bulldog.
● Sasha – A great elegant name for any female dog owner.
● Millie – The name Millie has recently been made even more popular after the actress Millie Brown.
● Sassy – This name is often given to American Bulldogs who are very playful.
● Molly – The name comes from an Irish origin and is quite popular amongst people of this generation.
● Pixie – Some owners of American Bulldogs named their dog Pixie as a way to show their sense of
humor.
● Lola – This name would be perfect for a dog that is known for strength, such as a bulldog.

Naming your American Bulldog after a character in a movie or a dog from a famous film is the
best way to give a name that is fashionable, unique, and possibly recognizable by many.

● Chance – The name of an American bulldog from the movie Homeward Bound.
● Khaleesi – This pop culture reference has become a popular name for female dogs, as it is a reference to
the main character from the hit TV series Game of Thrones.
● Lupin – Remus Lupin is a character in the Harry Potter novel series (and movies).
● Delgado – It is the name of the German Shepherd in the movie Beverly Hills Chihuahua.
● Marley – The popularity of this name skyrocketed from the movie and book, Marley &amp; Me.
● Sparky – This name has long been popular, but gained even more attention after the hugely popular
animated series South Park.

● Benji – The main dog from the movie Benji – a movie where a stray dog goes on a mission to save two
children who have been kidnapped.
● Zero – The well known ghost dog and companion to Jack Skeleton from the animated film The
Nightmare Before Christmas.
● Slink – The hilarious dog from the Pixar animated film Toy Story.
● Shadow – This is the name of a dog from Homeward Bound.

These days it seems naming your dog something exotic is a great trend. Therefore,
we had to include some of these words that may not be commonly known to provide some
foreign variety.

● Eleanor – The name Eleanor is French in origin; however, its meaning is unknown. The name Eleanor is
usually paired with the name Franklin as a tribute to the United States President and his first
lady.
● Nanook – The name Nanook is Inuit in origin and translates to mean “polar bear.” It’s a great choice for a
name if your American Bulldog has white coat.
● Iago – The name Iago is Spanish in origin and means “supplanter.” This name is commonly used as a
reference to Shakespeare’s novel Othello.
● Czar – The name Czar is a Russian baby name. In Russian the meaning of the name Czar means
Emperor. Best suited for American Bulldogs that have alpha traits.
● Kushala – In Sanskrit, this means wholesome one, which is quite befitting a dog like the American Bulldog.
● Odiche – In Ibo, this means ‘one who is special.’
● Tyvette – This is a combination of two popular names Ty + Yvette.
● Goren – A word in Basque meaning excel; above all.
● Sheela – In Hindi, this means kind and is worth giving to a sweet dog like the American Bulldog, contrary
to what people might believe due to its appearance.

One thing that many dog owners tend to do is name their dog after its appearance or
personality. There are a lot of factors to consider when examining what goes into a dog’s
defining features, whether it’s their actions in itself or simply just the color of their coat and/or
size of their body.

● Rex – The origin of the name Rex is Latin and by definition it means king. This name suits the
American Bulldog.
● Butch – Butch certainly sounds like a strong, cool moniker for your American Bulldog.
● Danger – Badass dog names don’t get much cooler than this. It shows an aggressiveness and dominant
nature, which may exemplify the appearance of the American Bulldog.
● Bane – With a mix of brute strength and exceptional intelligence, this is the name of the super villain
from the Batman series.
● Chomper – A name for a strong dog, much like the American Bulldog.
● Diesel – This is definitely a name that is popular with male dogs, especially those that have a strong
image (this may have come from the actor Vin Diesel).
● Duke – A popular male dog name for any dog that has a bit of meat on its body.
● Goliath – From the old Bible tale of David and the Goliath. While the American Bulldog may not be super
big, it has a strong build which makes this name perfect.
● Jagger – This may not be a tough name, but after the singer Mick Jagger, it is definitely a name that is
considered cool.
● King – The name of this dog is perfect to describe a hound that holds itself up like a king.
● Tank – There is no doubt that a dog like the American Bulldog that has a tough build is like a tank.

There is no doubt that some people don’t need to give their dog a super serious name that has
some profound meaning. Some dog owners like to take it easy and simply name their dog after
something silly or funny.
● Dobby – If you have a little pup that is willing to do anything to serve you as his master then Dobby could
make a great name choice for you! Any Harry Potter fan will recognize this name as being
reminiscent of Dobby the house elf who serves his master completely.
● Jiminy – Does your American Bulldog act as your conscience and keep you in line most days? Well if
your dog is your own personal Jiminy Cricket why not go with Jiminy as the perfect name
choice?
● Pez – Pez is a small classic name for a dog with far too much energy and can be used for a male or a
female dog.
● Chalupa – A name that just incites laughter whenever it is said.
● Chewy – This is a name that cannot be denied as being funny and hilarious, especially for a dog with an
underbite.
● Chubs – Even though the American Bulldog isn’t all fat, it is funny to give to a dog that loves to laze
around.
● Hodor – Named after the popular character from Game of Thrones, this is perfect to describe a funny
large dog.
● Hunk – A silly name to give to a dog that just lies around and is a bit on a meaty side.
● Porky – Another funny name that is in reference to the American Bulldog’s somewhat chubby side.
● Fatso – This is also another ridiculous name to give to a dog that loves to be lazy.

The names below list out some famous dog names grabbed from history, film, TV, and/or simply
through the sheer fact that they are the pet of a well-known celebrity.

● Fuzz – A name of the character from the comic strip Ziggy, published in the late 60s.
● Samantha – A highly popular name of a dedicated dog from the film I Am Legend.
● Bear – A dog from the movie Crimson Tide.
● Fala – Scotish Terrier Fala was U.S. President Franklin D. Roosevelt’s pet from 1940 to 1952.
● Adonis – A very strong name for an American Bulldog, and the name of an English Setter that received
the AKC registration #1.
● Sam – This is a plain name but a popular one for any male dog, and comes from the second pet dog in
the comic strip Family Circus.

Anne is a wellness writer with a lifelong love of animals large and small. As a former veterinary technician, she has a passion for your pet’s well-being. Anne rescues and rehabilitates animals in need. She shares her farm with lots of critters including horses, sheep, dogs, cats, rabbits, and chickens
Connect with Anne: