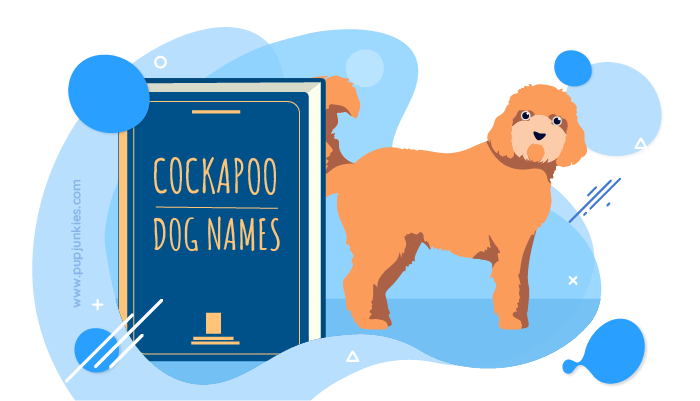 The Cockapoo is one of the most popular designer small breeds, popularly known for its high intelligence and adorable looks.

This dog comes in 4 different sizes and its weight varies from 6 to 20 pounds, depending on its type. They have a moderate level of energy and are easily trained due to their aforementioned wit and extremely playful nature.

They thrive on attention and are generally somewhat dependent. It is also said that these dogs are prone to suffering from separation anxiety if separated from their family or left alone for a long time.

Some of the names below are part of a list of popular male dog names, but also recommended monikers that fit the overall look and behavior of the Cockapoo.

The name means a noble friend or a friend of elves. This may be rather befitting for a breed known for its affectionate and amiable nature.

Arthur is a name of a famous king; it is also related to an old obscure Roman family name.

Name with German meaning of shield or armor. While these dogs aren’t the biggest, baddest dogs out there, these little pups are loyal and will protect you, like an armor suit.

If your Cockapoo is a dog with a dark side to it, name him Conan which means small wolfhound.

A common choice for many Cockapoo dog owners.

Felix is a happy dog name, befitting a highly energetic and happy pup like the Cockapoo.

A name of noble descent, and somewhat popular amongst Cockapoos.

The name comes from an old English element ‘Hoer’ which means pile of rocks or stones.

This is a German word meaning peaceful. While this may not be completely befitting a Cockapoo, it definitely fits the appearance which is why it may be popular.

This has been ranked as one of the most favorite dog names out there, and it means divine spear.

The names below are specifically great for female Cockapoos.

Derived from an old French word ‘Arcie’ meaning fortress, this name can exemplify the protectiveness and loyalty Cockapoos demonstrate.

Silky is an excellent name for your female Cockapoo if she has an extraordinarily luscious coat.

This is another name which may fit with your dog’s gorgeous furry coat.

A new ‘in’ name for your precious female dog that many owners have been choosing lately.

This is a famous waterfall in America, and is also the name of a popular American actress.

Pronounced as (eye-la) which means island.

This name could go with your light cream or caramel colored puppy.

A fairy tale character with long golden hair, a name that befits a dog with a beautiful coat of hair.

A girl’s name meaning unfortunate. Although this name may not have the prettiest meaning, it is interestingly quite popular with Cockapoo owners.

Naming your Cockapoo after a character in a movie or a dog from a famous film is the best way to give a name that is fashionable, unique, and possibly recognizable by many.

This one is after the lead character in the famous movie Terminator. The names suits your daring and brave female Cockapoo puppy.

From the movie “Lady and the Tramp”, this name is for a pretty lady with a boyfriend on her tail.

If your Cockapoo puppy is a real clown; this name has been chosen as a popular one as it is based on the character from the 2006 mockumentary film.

A character from the film “The Little Rascals”. Similar to the character, it illustrates the wide-eyed characteristics of your pup.

Taken from the 2003 movie Elf, this name is a popular one for the Cockapoo breed.

This name, or in its short form – Chewy, is taken from the fictional character in Star Wars.

From the Wizard of OZ, this name is appropriate for short tempered pups.

Derived from a famous movie based on Hachiko the dog.

Based on the famous American cartoon series, meant for abnormally funny dogs.

For young puppies who like to chew on umbrellas.

These days it seems naming your dog something exotic is a great trend. Therefore, we had to include some of these words that may not be commonly known, just to provide some foreign variety.

French name for the one who resembles a lioness, much like your own beautiful Cockapoo.

A Chinese name for delicious steamed buns. A perfect unisex name for your adorable puppy who is so adorable, you just want to eat it up.

Pu Yi was the last Emperor of China who inherited the throne when he was only two years old. The name’s elegance and refined quality match the appearance of your Cockapoo.

An Irish name for a little dark colored puppy.

Another Irish name for a light colored Cockapoo.

A robber or thief, just like your Cockapoo, hustling for food.

For your easy going, friendly dog.

A term used for a handsome man, and a name that may befitting a handsome Cockapoo dog.

For a quirky-looking Cockapoo puppy.

This name is befitting those Cockapoos that are filled with energy, mischievous and somewhat of a rascal.

One thing that many dog owners tend to do is name their dog after their appearance. Here are some fun names, based on the Cockapoo’s looks.

This is perfect for a dog with a brown coat of fur.

This name is obvious, as it is referring to the curly hair of this dog breed.

This is to describe the soft feel of your Cockapoo’s fur.

Many say that the Cockapoo looks much like a walking carpet.

Once again, referring to the Cockapoo’s rug-like looks.

Strangely, this is quite a popular name for this dog.

Just like the liquor, your Cockapoo may have a cream-colored coat of fur.

This name can relate to the dog’s brown fur, but also is just a great name for a Cockapoo.

A common female dog name for a dog that has beautiful fur.

Remember the funniest hobbit in Lord of the Rings?

A name for one that moves around like she owns it all, much like the attention-loving Cockapoo.

A goofy character from the sitcom ‘Friends’. Since this breed is famous for its clown-like traits, it is befitting.

A reddish brown and semi-precious stone, an ideal name for your reddish pooch.

For an adorable dog like your Cockapoo, there is no perfect name more than this one.

For a dog with strong sniff instincts, that is witty and clever.

This name is hands down hilarious. For a dog that may drool quite a lot, why not name your drooling pup Droolius Caesar.

Another witty name based on the character from the show “Sex and the City”.

This name is a homage to the metal rock singer Ozzy Osbourne.

The names below are derived from historical characters, films, TV shows, or simply because of the sheer fact that they are the pet of a well-known celebrity.

This can be applied to any breed that is sweet and shy.

This name has a sound ot it, like you’re talking about your best friend.

Another name which never grows out of fashion.

A cute name for your Cockapoo, who might appear to have a sad look, as some do.

A foreign-inspired name for your female dog.

A name for a dog that has a unique mind of its own.

Perfect for your little friend who follows you around like a shadow.

A name ideal for a loyal dog and one that is very energetic, just like the boxer from the movie “Rocky”.

A popular name for a companion designer breed dog.

Gone are the days when your dog would settle for boring and mundane names. As mentioned, Cockapoos are known for their clownish behavior and adorable personalities. With these unique, interesting and fun names, you have tons of inspiration to name your beloved pet. Just remember, make sure to choose the right one, since this is the name that will define your furry companion for a long time.